Canadian glam rockers Amour release video for “I Love You”

Toronto, Ontario, Canada based glam metal rockers Amour have released their first video in support of their new album Say A Prayer For Rock And Roll for their song “I Love You.” 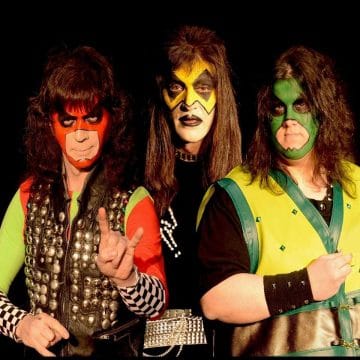 Sleaze Roxx stated the following in its review of Say A Prayer For Rock And Roll:

After receiving a very lukewarm review from Sleaze Roxx for their self-titled five-song EP, Amour are back for more with a full-length album entitled Say A Prayer For Rock And Roll. My biggest issue with the songs on Amour‘s previous self-titled EP was that they sounded like a bunch of rough demos but I thought they had the potential to be saved with some good production. So what happens when Amour get the decent production that their songs deserve? Well, the result is that I am still not liking their songs but for different reasons this time around. Once again, the songs have a real retro feel to them reminding me once again of the music from those first few early KISS albums but with better production.

The problem this time is that I don’t like any of the lead vocals. I am mindful that both guitarist Mitch Knight and bassist Rick Priest apparently take turns handling the lead vocals. I can’t really tell who is singing which song but overall, the singing on Say A Prayer for Rock And Roll just grates on my nerves. I don’t know if the singing is off key or what but I have a hard time getting through any song due to the singing.”

Amour‘s “I Love You” video: