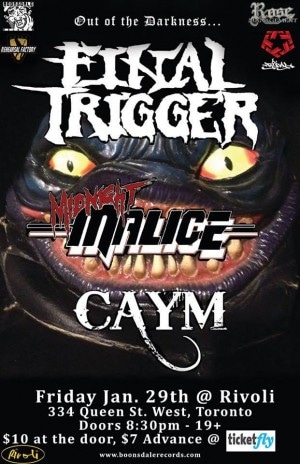 In a surprise announcement, Midnight Malice have declared that their gig supporting Final Trigger at The Rivoli in Toronto, Canada on January 29, 2016 will be their last.

The Canadian heavy metal band have posted the following message (with slight edits) on their Facebook account just a few hours ago:

After this home town gig the boys will be going on permanent hiatus with live shows, hoping to see everyone out for another trek east of Spadina.

Back in September 2015, Midnight Malice had released a self-made video providing an update on the band’s future plans. In the video, and when asked what is going on with the band, drummer Hunter Raymond stated, “We’re trying to work on some new songs. We’re trying to get a new album together.” New bassist Tom Gervais piped in, “You know what? You know what’s different? You know what’s different from the old album? Tommy G! I am playing on the new one. It’s all about fuckin’ ripping!” 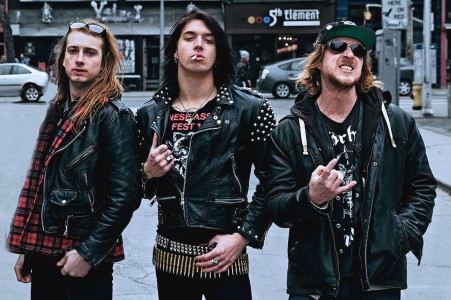 Midnight Malice released their debut full-length album Proving Grounds in January 2014 and the album landed the number ten spot in Sleaze Roxx’s Top Ten Albums of 2014. The group’s line-up had been in a state of flux for a number of years as Sleaze Roxx declared back in July 2015: “Released back in January 2014, Midnight Malice‘s Proving Grounds, with its old school metal sounds, predictably withstood many challenges over the year to land in Sleaze Roxx’s top records of the year. Unfortunately, Midnight Malice‘s line-up outside of frontman Caleb Beal and drummer Hunter Raymond has been in a state of flux for a good portion of 2014 and the band is apparently still looking for a second guitarist to round out its line-up.”

Speaking exclusively to Sleaze Roxx, Midnight Malice‘s one-time manager and supporter Craig Rose was asked today whether the band was calling it quits or simply going into hibernation while recording a new album. Rose replied: “All of the above Olivier; the only known unknown is that there will be no more Midnight Malice shows after this one. I don’t know really more what I could add. There’s no game plan really outside of not playing anymore Malice shows.”