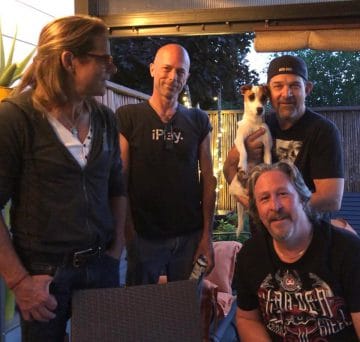 “Headed back to the studio.

Time to put some finishing touches on our upcoming record. ??”

Wikipedia states the following in part about Sword‘s history (with slight edits):

“In 1981, south of Montreal in Saint Bruno de Montarville, Quebec, Rick (vocals) and Dan Hughes (drums) formed a heavy metal band called Sword. They were joined by guitarist Mike Plant and bassist Mike Larocque in the first lineup of the band. They signed their first commercial contract in 1984 with Aquarius Records.

Sword released two albums for Aquarius in the late 80s; the debut album Metalized in 1986 and its follow-up Sweet Dreams in 1988.

They toured in the support slot for Motörhead and Alice Cooper, and the group opened for Metallica on the 1986 Master of Puppets tour.

Rick Hughes also formed Saints & Sinners and released a self-titled album with them.

In October 2006, Aquarius Records released The Best of Sword a compilation album. Metalized was re-issued in 2009.

Throughout their career, Sword sold in excess of 180,000 albums.

Sword have been more active since 2011 when they reunited for a show in Saguenay.

They have since played various festivals in Canada and Germany. In 2016, they released Live Hammersmith, recorded while they were on tour supporting Motörhead in 1987.”