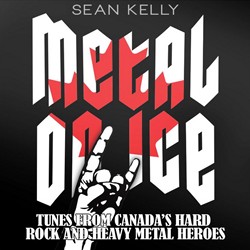 Billboard charting guitarist Sean Kelly is excited to announce the official ‘Metal On Ice’ CD release show, scheduled for Saturday, May 10th at The Opera House in Toronto as part of Canadian Music Week 2014.

“I wrote a book to honour my hard rock and heavy metal heroes,” says Kelly. “Through the help of our fans and Pledge Music we turned up the volume with an amazing new EP, and now it’s time to crank the amps, stack the speakers, and put on the loudest book release party in history! The Metal On Ice concert is going to bring the passion of the book and EP to life through an evening of great songs and killer performances… Get your metal on!!!”

“Guitauthor” Sean Kelly’s book ‘Metal On Ice’ has received accolades from the music press and fans since its release last fall. “For those of you who are fans of Canadian ’80s rock this is a real page turner… highly recommended!” commented Brighton Rock guitarist Greg Fraser. The book reached the #1 spot on Amazon Canada’s ‘Best Sellers in Heavy Metal Music’ section, and was selected as one of iTunes Canada’s ‘Best Books of September (2013)’.

In 2013, a successful PledgeMusic campaign for the Metal on Ice project reached 112% of the target fundraising goal, thanks to international fan support.