Toronto, Ontario, Canada based heavy metal rockers Villain featuring former Midnight Malice frontman Caleb Beal have announced that they have finished recording heir debut album which will be released in 2018. 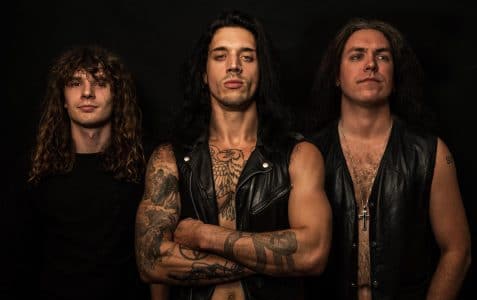 “THIS IS SNAKE GREASY CUMIN’ ATCHA LIVE FROM ORLANDO, FLORIDA!! Currently crushing beers poolside and “takin’ er ease” as I once heard Ian Chains say. Anyways, me and the big bois(Caleb, Gaz) in Villain got our debut record fully recorded and were gunna unleash the grease on ya in early 2018. Toronto needs to wake up and were talking atleast 5 slammers coming down like hammers so expect to see us on the road promoting it very soon. Stay in tune and we will too! ? –Jake “small boi” “he’s only seventeen” Greasy“

Villain in the Studio

Caleb Beal of Villain at the Lincoln County Social Club recording studio in Toronto, laying down some tasty tracks for an up and coming release