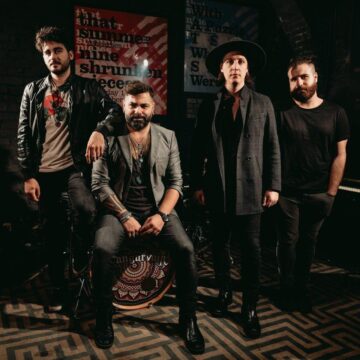 “Formed in 2013, with thee albums out “Best Ride Horse”, “Freaks” and “Roots and Returns” and several tours around Europe supporting among the others Gilby Clarke (Guns N’ Roses), Hardcore Superstar, Skillet and The Darkness,  Hangarvain have reached within few years a strong international fanbase and a status as one of the most recognisable and untiring live acts around.

In 2019, a new cycle begins: after a warm-up summer tour the band released their fourth record “The Great Machine” on Oct 11th and embarked on a new Europe tour, this time as special guest for rock legends D-A-D.

In the middle of a world pandemic, with no shows allowed, the band teamed-up with his long friend and Swedish legend Thomas Silver (former member of the legendary Hardcore Superstar) for a fresh and groovy alt rock track which will make the joy of many fans out there.

New work, new dynamism and same exuberance for Hangarvain that always knows how to dare a different personality to each single, always using and dosing a brilliant composition, southern hard rock and a splash of blues vibes.

We’re proud to present the ‘Animal Instinct’  premiere for Canada in cooperation with Sleaze Roxx.

“In these times of darkness and imprisoned souls, we’re trying our best to dream big and keep the faith in life. That’s what our new song Animal Instinct is about and we couldn’t be more excited to share this new chapter in Hangarvain‘s journey with the amazing Thomas Silver, a legendary musician and a bright heart we have the privilege to call as a friend” (Hangarvain)”

Speaking exclusively to Sleaze Roxx, Hangarvain explained how they ended up hooking with Thomas Silver as they stated: “We share with Thomas the same record label, Italian Volcano Records & Promotion, and since we made several shows together during the past years we became very good friends. Thomas is a great musician and a wonderful human being so we’re very thankful and excited that he accepted to work with us on both this new song and further projects hopefully to come in 2021.”

In terms of the impact of the Covid pandemic, Hangarvain indicated: “Covid-19 impacted us very badly. After been touring Europe in late 2019 together with Disneyland After Dark, we were supposed to be again on the road since last Spring. We had 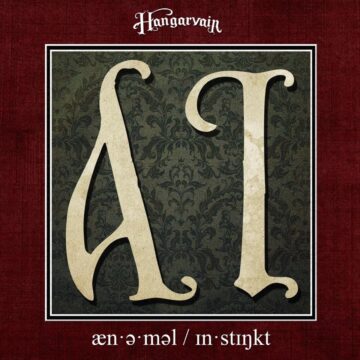 shows booked all around Europe with Michael Schenker, Kris Barras, some headliner shows and also some big summer festivals like Hills Of Rock with Slipknot… We had three full European tour cancelled or rescheduled and lot of national gigs in Italy postponed due to the emergency. Europe is facing the second wave of the Pandemic these days with lot of lockdowns everywhere. We had only a little window of freedom in the past couple of months, enough to produce a song and record the video with the amazing Thomas Silver.”

With respect to the band name, Hargarvain stated: “It happened many years ago. We were looking for something completely new, do you know how hard is to find a name that no one else already used? Hangarvain sounds good to us even if it does not really mean something specific or not in a totally correct form. Let’s put this way, it contains the words “hangar” and “vain” and since our founder members Sergio (lead singer) and Alex (guitarist) are deeply passionate about airplanes they loved to have a name that could evocate an empty space left by an airplane that’s going into action.”

In regard to Hangarvain‘s plans for the end of 2020 and year 2021, the group indicated: “We’re very focused on promoting Animal Instinct in the next weeks and we hope to be able to go back on stage in the very first months of 2021. We’re planning some headliner shows together with Thomas Silver as special guest and has just been announced that we will play Hills Of Rock Fest 21 and Planet Rockstock Fest in England. We’ll be guests of Michael Schenker for all the European shows in December 2021 and there are lot of other things still to be revealed… But today it’s very hard to be 100% sure that these things will come true, so now we just hope that this terrible pandemic will be over soon, that all the people we care the most stay safe and everyone can go back to his normal life.”