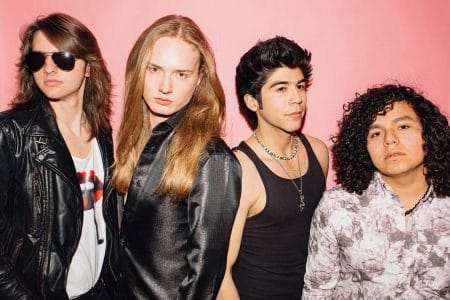 Calgary, Alberta, Canada based hard rockers Dextress will be flying across a good portion of the vast country of Canada to record their debut album with renowned producer Glen Robinson in Montreal, Quebec, Canada.

The following message was posted on Dextress‘ Facebook page a few days ago:

“Hey guys, we’ve got big news! We will be flying out to Montreal at the end of this month to record our DEBUT ALBUM with Glen Robinson! Glen has been involved with amazing artists including AC/DC, Keith Richards, David Bowie, Ringo Starr, Dave Grohl and many more. We are incredibly honoured and excited for this opportunity, and we wouldn’t have gotten here without all of your support. We love you all!”

Sleaze Roxx stated the following in its review of Dextress‘ debut EP The Demo: “Dextress has to be the most exciting and promising band that I have heard in a long time. It’s very hard to believe that the songs they are coming up with actually emanate from one 16 and three 17 year old “kids” — they simply sound too good and too sophisticated to come from such young people. Lead vocalist Jackson Taylor has just about the perfect voice for sleaze type rock and the rhythm section of bassist Chris Garcia and drummer Marcos Rodriguez is rock solid and seem to bring musical influences other than pure hard rock or metal to the table. But the best of all is Mark Janz‘s guitar playing — think guitar hero in the vein of Jake E. Lee or George Lynch and you will have an inkling of the kind of talent he possesses. The young hotshot guitarist does not overplay on any of the songs but his guitar virtuosity and talent are undeniable.”