The Canadian rockers Open Air have recently released the album Lessons From The Crow.

Open Air describes themselves as follows on their Facebook account: “A Rock n Roll band from Calgary. Inspired by the groovyness of the 70’s with a raw modern edge that will leave a boot print on your backside.”

The group’s Facebook page goes on to state (with slight edits): “Open Air is a hard rockin’ quartet from Calgary, Alberta. Pulling from their musical influences, which include Led Zeppelin, Rival Sons, Jet and The Answer, Open Air brings back everything that was wonderful about 1970’s Brit Rock, but with an updated, modern taste. So modernly old school, Open Air’s “no fear” stage show and no frills approach to music making has garnered the band attention from fans and industry players alike. Their goal is to bring back musicianship, relying on talent rather than machines to manipulate or doctor their sound. It’s time to fill neighborhood clubs and halls with live music, and Open Air is on a mission to tune the world into rock, one club at a time; a fresh approach from men born in the 90’s!

In the summer of 2011, they released a six song EP, titled All My Queens. A great representation of the band, at the time, All My Queens is raw, basic, bare bones rock! Crank it up and let your mind wander back to a time when rock was still growing. Since the release of All My Queens, Open Air hasn’t wasted any time, and with the addition of new guitarist, Garrett Greenhall, released their sophomore effort Extended Play. With this new material comes an evolution of Open Air, as they explore new ideas, to create a more dynamic and mature, but just as pure and heavy sound as before. After the release of Extended Play, Open Air has seen a growing fan base and joined One Bad Son on their Western Canadian Tour. It’s a new music revival courtesy of Open Air!” 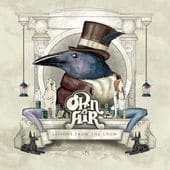 Our first music video!!! Big thanks to Russman @ CJAY 92 Calgary for his wicked filming and just being a genuinely rockin’ dude! “Extended Play” is available…