Canadian rockers Skull Fist have released a cover of Tom Petty‘s classic “I Need To Know.” 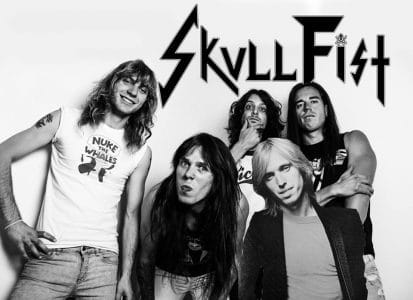 Skull Fist have posted the following message on their Facebook page earlier today:

We recorded a few cover tracks. It was beyond exciting for us to record a version of this song because Tom Petty is one of the very few songwriters that I have a serious amount of respect for, although it’s impossible to match the awesomeness of the original, we did our best! we are really only interested in covering music that we can do justice too and add our own feeling to. For the fist, covering tracks is a very sacred ritual that has one mandatory consideration. Does this NEED to be covered? or is the original just too perfect to even attempt? it was a fine line for this track! 😉

This video also includes photo’s we received over the last while of fellow fistians with Skull Fist tattoo’s, so thanks to the bro’s and bro-ettes for feelin what we do strong enough to ink it on you! i promise we won’t make you regret them! haha if your tattoo is NOT pictured here sorry, I just pulled some from the photos page but share them with us and they will appear in other places!

Skull Fist formed in 2006 but looked to be changing direction on June 30, 2015 when the group’s founder Zach Slaughter advised via Facebook that he was leaving the band for “personal reasons.” Three months later, Skull Fist announced that Slaughter was rejoining the band via the following Facebook message: “Guess who’s been muscled back into the band? “After a few months of being a loser I realized Skull Fist is my baby and in the 21st century it’s no longer acceptable to abandon your baby, you must embrace that cute little thing with all the love you can muster up or fake. I guess I just needed a break as the boys kept trying to tell me! anyways, you can all stop bugging the shit out of us on the topic, It was not for “hype” it was not for drama, it was not for marriage. I simply hit the panic button too soon I guess. I am literally going to pretend that none of this ever happened so if you happen to question me on the subject and I look confused you will know the frontal lobotomy worked ? “- Love Slaughterman5000.”

Skull FIst is a band from Canada, they make music. This is a Tom Petty cover, because Petty rules bro. We decided it was cool to just attach pictures of some…