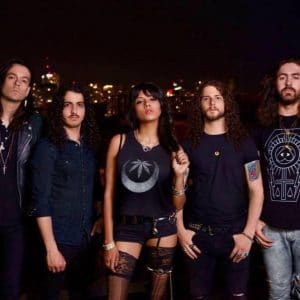 Sleaze Roxx stated the following in its review of Diemonds‘ Never Wanna Die album: “…the fury that can be found on The Bad Pack seems to have been replaced with more calculated slower paced material albeit with a heavy sound. How can songs such as “Secret” and “Save Your Life” not be considered more “commercial” sounding than anything found on The Bad Pack?

My favorite tracks on Never Wanna Die are the faster paced “Better Off Dead” which is likely the closest remnant to The Bad Pack, “Meet Your Maker” which I first heard more than two years ago so which has an advantage on the other tracks, and “Ain’t That Kinda Girl” which puts the showcase on Panda‘s singing — which she does throughout the entire album. As I previously indicated and should be emphasized, all of the tracks on Never Wanna Die are good ones. At the end of the day, Never Wanna Die is a more modern sounding commercial effort compared to The Bad Pack and for that reason, does not measure up to The Bad Pack in my eyes. That being said, I find that Never Wanna Die is still a solid and enjoyable hard rock album that will be getting a regular spin on my CD player for likely many years to come.”

Diemonds‘ video for “Secret” was premiered on Bravewords who reported the following:

Says engaging singer Priya Panda: “‘Secret’ is a song for anyone who’s kept something deep inside. Everyone can relate to the idea of having that one thing they’ll take with them to the grave. We wanted the atmosphere in the ‘Secret’ video to capture what it’s like to live within that darkness. With everything that’s going on in the world today it’s also a reminder to take a second look at things, because when you do, you’ll come to realize that nothing is ever quite as it seems…”