No rest for the wicked as the hard working Canadian sleaze rockers Diemonds will be playing 24 shows in 28 days while hitting five countries in Europe. The group will be starting its first ever European tour with a stop on day three of the Hair Metal Heaven Festival before playing additional shows in the UK followed by tour stops in France, Spain, Germany and Austria.

“Next adventure starts in just a few days. Adding new songs from every era of the Diemonds catalogue for this run. Rehearsals have been a blast, and we are ready to roll. See you somewhere! 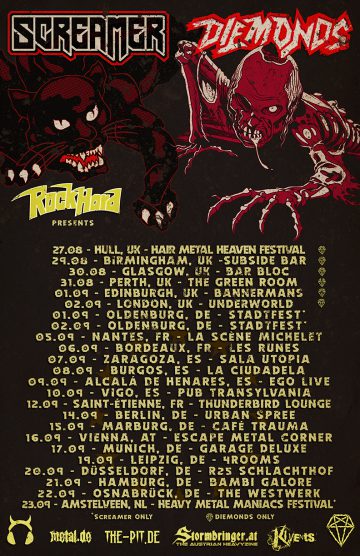 Sleaze Roxx stated the following in its review of Diemonds‘ concert at the Bovine Sex Club in Toronto, Ontario, Canada back in June 2017: “It seems that ever since getting bassist Tyrone Buccione in the line-up, Diemonds‘ live performances

have been on a whole other level and it was the case again on this night. With a rather strict set time to adhere to, the group let the music do the talking as they tore through mostly songs from their latest album Never Wanna Die (which landed the #3 spot on Sleaze Roxx’s Top Ten Albums of 2015 and a remarkable #8 on the Sleaze Roxx Readers’ Top 20 Albums of 2015) with a couple from The Bad Pack, a couple of new songs and the surprise closing track being a cover of Kill Cheerleader‘s “Deathboy” along with a guest appearance from a surprise visitor. Considering that I had seen Diemonds open for L.A. Guns less than two months ago, I was quite pleased that they mixed up their setlist somewhat….

What I really like about Diemonds is that they have been able to inject even more life into some of their songs when playing them live. The title track from Never Wanna Die was a great song to start off with but live, the band has started to incorporate some “Whoa Oh Oh Oh” type chants at the beginning of the song and throughout until the verses kick in which gets the crowd participating and adds a new dimension to the song! Kudos to Diemonds for doing that!….

And what can I say about the Diemonds‘ band members? They were all full of energy and despite the rather small stage, moved around as much as possible….”

Diemonds‘ “Take On The Night” video:

DIEMONDS – TAKE ON THE NIGHT

This is Diemonds official video for Take on the Night from the upcoming record “The Bad Pack.” http://www.diemonds.net Party down in another town!