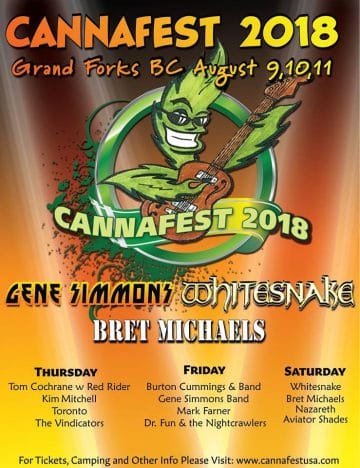 The Canadian rock festival Cannafest is back for another edition in Grand Forks, British Columbia, Canada from August 9 to 11, 2018.

Cannafest 2018 features a number of artists that are regularly featured on Sleaze Roxx consisting of the Gene Simmons Band, Whitesnake and Bret Michaels. The festival also features newcomers Aviator Shades and classic rock acts Nazareth and Burton Cummings and Band.

Sleaze Roxx spoke exclusively to CannaFest organizer Chuck Varabioff last year to find out more about the festival that will be celebrating its sixth edition this year. In terms of how CannaFest got started, Varabioff stated: “After many years of wanting to put on shows, I decided that it was time to make it happen. I hired a Canadian recording act to perform on the loading dock of my business for an outdoor concert. We invited friends, family, neighbours and my ten thousand plus customers. Sixty people showed up. Sixty. I lost my shirt! Those that know me, know I’m not the type to give up so there was no way I was going to let that happen again. I booked another show in a different venue and hired more bands and CannaFest was born. In 2015, I took the show on the road and brought CannaFest to my home town of Grand Forks, British Columbia. The rest, as they say, is history. CannaFest has grown from a 60 person backyard concert to a huge, outdoor, debt-free, classic rock music festival in just three short years. I’m proud to say that this August, we are expecting upwards of 10,000 fans.”