Swedish rockers Cap Outrun consisting of Chandler Mogel (Outloud, Radio Exile) on lead vocals, Andrée Theander on guitars, Linus Abrahamson on bass, Johan Ludvig Rask on drums and André Egbo on keyboards have unveiled a video for their new single “Crazy Enough” from their upcoming album High On Deception, which will be available via Frontiers Music Srl on December 10, 2021. 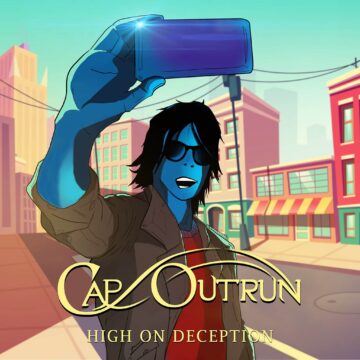 Track List for High On Deception:
01. Crazy Enough
02. High On Deception
03. Disaster Mindset
04. In The Shade of The Masquerade
05. Shadows On The Wall
06. Our Brightest Day
07. My Destination
08. Run Before We Walk
09. As Long As You Believe
10. Dopamine Overflow

“From the album High On Deception.

Frontiers Music Srl is thrilled to announce the release of Swedish rock band Cap Outrun‘s new album, “High On Deception,” on December 10, 2021. “High On Deception” is a distinctive record filled with playful odd time signatures and interesting harmonies, but it never loses its core of strong melodies and an exceptional groove.

”It feels great to work with Frontiers on this release and I’m anxious to hear what the label’s followers will say about it. Ever since Mr. Big, who’s one of my all time favorite bands, released their ”What If” record, I’ve been following the label’s awesome releases and I’m both impressed and grateful for what they’re doing for the rock music scene today. I’m thrilled about joining them with Cap Outrun and everybody in the band is very excited about this!” says guitarist Andrée Theander.

The writing and production process for the album was a very successful collaboration between founding members Andrée Theander and Erik Gafvelin Wiss. Although Erik is still involved in Cap Outrun, he has decided to take a step back as the main keyboardist to focus on his production work. His spot has been given to the very talented session player André Egbo. Vocalist Chandler Mogel (Double Vision, Outloud), bassist Linus ”Mr. Gul” Abrahamson (Andromeda, Constanica), and drummer Johan Ludvig Rask round out the line-up.

Musical influences are everything from Swedish progressive rock bands Kaipa and Karmakanic to legendary American bands like Toto and Boston. Some of Andrée’s and Erik’s friends have even mentioned Dirty Loops when they’ve dropped around Erik’s studio in Stockholm while the album was still in the making. [Who knows, maybe it could have something to do with bass player Linus’ close collaboration with the Dirty Loops members Henrik Linder and Aron Mellergård for their newly released bass and drum transcription books?]

Cap Outrun formed in Sweden in 2007 when Andrée Theander and Erik Gafvelin Wiss met at a Swedish university for music production and started to make music together. The two youngsters wrote and recorded a lot of songs and with a little help from a bunch of friends, six of the songs ended up on the very first Cap Outrun release, ”Influence Grind” (2008). The music was somewhat complex with odd time signatures and unexpected song structures, but still contained memorable melodies and pop-flavored choruses. This perfect blend of rock, metal, and jazz made them fairly well-known within the underground world of prog rock lovers for a period of time. Andrée and Erik graduated from university and they decided to go their separate musical ways. Since then, they have stayed good friends, but were working on their own careers: Andrée as a session player, guitar teacher and with his own AOR/Westcoast project Theander Expression, while Erik started to build his own studio and mainly focus on producing and mixing records by other bands, like Creye, Cruzh, and Arctic Rain to name a few. Cap Outrun was essentially on hiatus after that self-released EP…until now!”