Swedish melodic rockers, Captain Black Beard, have released a video for their song “All The Pain” from their fourth album Struck By Lightning, which was produced by H.E.A.T‘s keyboardist Jona Tee and just released via MelodicRock Records on April 25, 2018. 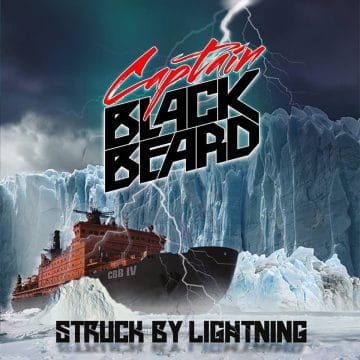 “I don’t like to give bands negative reviews for many reasons, but mostly because they work their asses off to be the best they can be. And good for them. Bands don’t need some reviewer to undermine them. With that caveat out of the way, I am free to say that I’m less than impressed with Captain Black Beard. The music is bland and superficial, and on the poppy side of hard rock.

Captain Black Beard claim they are for fans of Aerosmith, Deep Purple, Guns N’ Roses, Led Zeppelin, The Beatles,and Alice Cooper. I hear none of those bands in any song on It’s a Mouthful. Alright and to be fair, there’s maybe a little Deep Purple on “Far Gone.” I don’t even know if I could make another accurate comparison, other than Danger Danger, or maybe Steelheart. But that’s doing a disservice to those two bands.”