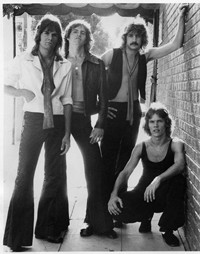 The brothers Cavazo and Quadros have been in discussions for some time to reunite, but previous business obligations – Carlos recording and touring with Ratt, Tony gigging with Hurricane (and others), Stephen commentating on mixed martial arts TV shows on Showtime Networks (Strikeforce Challengers) – have taken precedent… until now!

Stephen recently attended a Hurricane show in Hollywood, California, where Tony introduced him backstage to lead vocalist Andrew Freeman, who is enthusiastic about taking on the vocal role in SNOW.

The group released a self-titled 5-song EP in 1980 that included popular Snow songs “Crack The Whip” and “No Way To Treat A Lady” — both can be heard at www.reverbnation.com/SNOWBandToday. Snow’s music received radio airplay on KROQ and KLOS. The original Snow EP has become somewhat of a collectors item.