Veteran drummer Carmine Appice (Vanilla Fudge, Ozzy Osbourne, King Kobra) has rejected KISS guitarist Vinnie Vincent‘s assertions from last week that the latter did not cancel his own comeback shows in February 2019 and that the latter wasn’t happy with the replacement singer (Jim Crean) that was scheduled to do those gigs. Back on April 19, 2019, Vincent did a lengthy interview with Mitch Lafon for Rock Talk with Mitch Lafon where he stated a number of things including that (1) he had recorded every show that KISS did with him while on the tours supporting the Creatures of the Night and Lick It Up albums; (2) he had recordings of lots of great songs that did not make it onto the KISS Revenge album; (3) the one “uncontroverted fact” was that he did not cancel his own February comeback shows; and, (4) he was not happy with the choice of the singer (Jim Crean) to do his comeback shows in February.

Appice and Crean were interviewed by Jimmy Kay of Canada’s The Metal Voice yesterday and have rejected the latter two points previously stated by Vincent.

In regard to whether Vincent‘s various claims about the cancellation of the February shows were “incorrect”, Appice opined (as transcribed by Sleaze Roxx): “Incorrect. That’s not right. Sure. Incorrect. Especially when he was blaming it on the promoter [Derek Christopher]. I mean the promoter did nothing but try his best to make this happen you know?”

When asked about Vinnie Vincent‘s statement “There’s only one uncontroverted fact that actually did happen, and that is that I, Vinnie Vincent, did not cancel that show”, Appice opined (as transcribed by The Metal Voice with slight edits): “The cancellations came from Vinnie. He did not want to do the gig. I gave Vinnie three other singers to pick from but Vinnie did not like them and he said Jim Crean was good. For Vinnie to blame it all on Derek who is the nicest guy and is now really ill since all of this happened. Derek has not been able to stand up for himself because he has been really ill in and out of the hospital. The last thing on his mind is Vinnie Vincent right now, he is trying to get healthy. And to see Vinnie saying it’s Derek‘s fault, it wasn’t his fault. Derek the promoter did everything he can to make these gig happen. Vinnie is saying it’s Derek‘s fault. I’m saying it’s not his fault. Derek did everything and beyond to make things happen, to keep it on track. Derek brought Vinnie out of hiding. He put together that Kiss expo that Vinnie came out on, that made Vinnie money. Vinnie didn’t do that. Derek did that.” 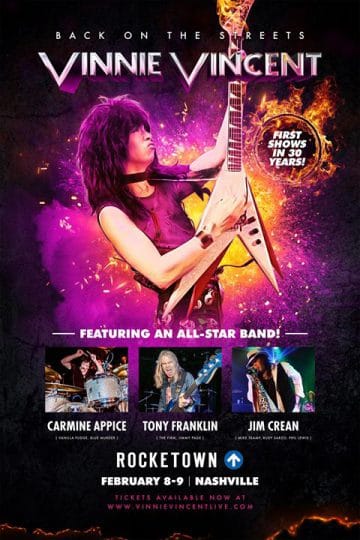 In terms of why Vincent made him one of the scapegoats for the canceled February shows, Crean opined: “I don’t think Vinnie Vincent should be blaming me. I was there just trying to help him out. I came into the band late and Carmine is a very high profile artist and so is Tony Franklin so I guess that leaves me to blame and the promoter.”

With respect to Vincent‘s claim that the promoter was to blame for the cancellations of the February shows and Vincent‘s disapproval of the choice in singer, Appice advised: “The promoter did nothing but try his best to make these gigs happen. The promoter Derek Christopher hired me because I knew Vinnie and I talked to Vinnie and we said maybe it would be cool if I did the gigs with him and Vinnie Vincent agreed. Derek hired me and put the deal together, then I brought bassist Tony Franklin in whom Vinnie never heard of before. Then they were going through tons of singers and I said  I have this guy names Jim Crean that can sing high just like the original Vinnie Vincent Invasion singer Robert Fleischman. I told Jim Crean about it and he was up for it. Then Derek said ‘Why don’t you put your voice on a couple of Vinnie‘s tracks and we will send it to Vinnie and see what he thinks’ and that’s what we did. And from what I remember Vinnie said to the promoter Derek that he thought Jim Crean was great.

So we were moving ahead and waiting for a set list and then when we never got any set list from Vinnie, the promoter sent me, Jim and Tony some lists of songs, which included Vinnie‘s songs and Kiss songs, and I thought that was what we were going to do and then Vinnie started to steer away. And I said to him, ‘I saw that clip of you playing that pre-Kiss cruise clip. You did not look comfortable on stage. You looked scared. And I blatantly said, ‘Can you still play? You didn’t do any solos?’ Vinnie said to me, ‘Yeah, I can still play.’ Then later on Vinnie said, ‘I don’t want to do any Kiss songs or my songs, I just want to jam for an hour and a half’ after he just put out a press release with the promoter saying I’m gonna do Kiss songs, Vinnie Vincent songs. This is him verbally saying that on the ad. Then he changed his mind on that and said he just wanted to jam. Quite honestly I don’t want to jam. I don’t want to go on the stage and jam. I want to play songs people want to come and hear. As for choosing Jim Crean as the singer, I was working behind the scenes getting Jim Crean to sing demo songs for Vinnie so he can hear what he sounds like. Derek, the promoter, said Vinnie was fine with him. Derek had no reason to lie about it so we were going to move ahead.”

Crean added: “Derek called me and wanted me to sing some of Vinnie‘s songs so I did that, they got back to Vinnie and they said he was very impressed with it. Derek called me the day after he talked to Vinnie and said that Vinnie was very happy with the vocals and he loves it and we are going to make a press announcement and put a poster up as well. Then Derek called me up and said to me to please start sharing the information to get a buzz going so then we started promoting it and then Vinnie started changing his mind.”

Since the cancellation of his two comeback shows in February 2019, Vincent has announced that he will reportedly be performing his album Speedball Jamm at S.I.R. Soundstage in Nashville, Tennessee, USA on Friday, June 7, 2019. Only 60 tickets were reportedly available for that show at $300 per ticket.

You can listen to the interview with Carmine Appice and Jim Crean by The Metal Voice below: