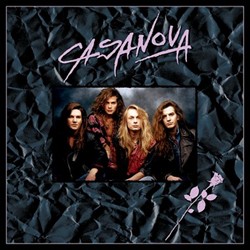 Casanova Debut To Be Reissued With Bonus Tracks In April

Divebomb Records/Tribunal Records are extremely excited to be releasing a DELUXE EDITION of CASANOVA’s amazing debut album on April 13th. This year marks the bands 20th anniversary and we couldn’t be happier to be presenting this special package to all the fans. Here is the story…

Though CASANOVA may not have become a household name in the 90’s hard rock scene it wasn’t for a lack of great songs and drive to succeed. Their roots began in such classic and esteemed German hard rock/heavy metal bands such as Mad Max and Warlock. Formed in 1990 when Warlock super-producer, Henry Staroste, brought Michael Voss and Michael Eurich together to craft the debut album, Casanova, that took the hard rock world by storm. Well, the hard rock world outside of the USA that is.

Touring Europe in support of the album, which eventually sold 170,000 copies, only helped to establish and strengthen their rapidly increasing fanbase. A devout fanbase that remains by their side, even now, 20 years later. Casanova has been out of print for years and was never actually released in the United States until now. Our new deluxe edition of the album includes not only remastered audio, but seven (7) bonus tracks. This updated release of Casanova is the ultimate edition and more importantly a celebration of the classic hard rock sounds of CASANOVA!

Divebomb Records are offering FREE SHIPPING within the United States for all PRE-ORDERS placed through tribunalrecords.bigcartel.com before album street date of 4/13/2010.