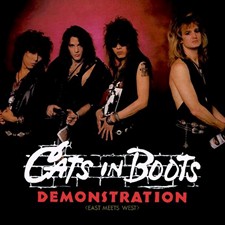 The original Cats In Boots EP has finally been reissued!

Out of print for almost 20 years, Demon Doll Records has teamed up with front man extraordinaire Joel Ellis to bring all you Hair Metal maniacs the long overdue reissue of the album that landed Cats In Boots the major label recording contract.

Recorded in 1988 in Los Angeles, California, ‘Demonstration: East meets West’ is the epitome of what makes Hair Metal the greatest music in the world! It’s sleazy, nasty, catchy and cool — re-releasing 2 classic CATS cuts “Girl’s All Right, Tonight” and ‘The Bayou Fool” (that can only be found on this record) as well as the original versions of “Her Monkey”, “Judas Kiss”, “9 Lives”, “Bad Boys” and “Heaven On A Heartbeat”.

If you love sleazy Hair Metal then Cats In Boots are surely a name you know well, but people have had a hard time getting their hands on the original EP release and we are proud to be part of putting a stop to that.

This album is silver pressed, digitally remastered, officially licensed from lead vocalist Joel Ellis and being offered at an introductory price of $12.99, so buy early and buy often as this price will only last for 2 weeks.

Pick up your copy of some Hair Metal magic today at http://demondollrecords.com/cats_in_boots.