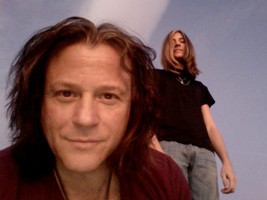 Cats In Boots Singer Teams Up With Son For New Album

Cats In Boots frontman Joel Ellis is teaming up with his son Joey Angel for a project simply called Ellis & Angel. The duo have started a Kickstarter campaign at www.kickstarter.com/projects/ellisandangel/father-son-music-act-ellis-and-angel-1st-cd-promo in order to raise funds towards their debut album and possible tour to promote it.

“After stepping away from the limelight and into the super cool journey of fatherhood, my super talented buddy Joey and I are now ready to breakout pro as the father and son music artists Ellis & Angel,” states Ellis.

“We plan to record, perform, tour, and hopefully place a few songs in films, or with other top name music artists in the USA,” continues the singer. “We’re also working now with international artists who may provide us the opportunity to break into foreign markets (world Latin music with a Spanglish duet, or songs licensed to well known Latin, or European artists, etc). We currently have the opportunity to work with major professionals and producers who have also worked with some of the biggest names in music. Our goal is to become successful in all world music markets as a major act.”

“Our new songs are a lot harder, Led Zeppelin-Lynyrd Skynyrd-early Aerosmith blues/rock, and we’re also putting some Pink Floyd type production into the songs as we get a good foot hold and evolve into a harder act in the second and third records,” Ellis tells Sleaze Roxx. “I’m also releasing my solo CD ‘Ellis Island’, finally. I’m also going to be releasing a CD full of demos and outtakes as well as a collection of live stuff from the Cats In Boots and Heavy Bones days.”

Joel Ellis has been a veteran professional recording artist since the late ’80s with notoriety as a highly respected vocalist, composer, and performer. He is known for his international/world music charting success as the lead vocalist and frontman for his bands Cats In Boots and Heavy Bones as well as his solo recordings. Joel temporarily left his professional career to attend to his ill father and to raise Joey as a single father in Cleveland Ohio and Los Angeles. Now 17 years later Joel and Joey are writing, recording, and performing together in a professional capacity in Ventura County and Los Angeles.

Samples of the Ellis & Angel project can be heard at www.ellisandangel.com and www.facebook.com/ellisandangel.