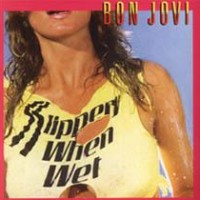 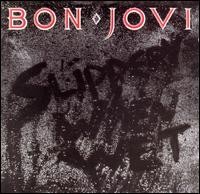 Skid’s Comments:
I honestly get a kick out of this one. Here we have a hot chick with a ripped shirt showing some cleavage, is that so bad? I don’t think anyone can be offended by the message on the t-shirt considering on a daily basis you can see women using their breasts as a billboard for such sayings as “who needs brains”, “front-line troops” and “don’t you wish you had some of this”. I suppose this cover could be seen as sexist (isn’t that what rock’n’roll is about), but what isn’t slippery when it’s wet? Bon Jovi went on to release the album with tame artwork, became massive stars and had thousands of women flash them their tits at live shows – how ironic.

Raving Maniac’s Comments:
Breasts. Yabos. Bazookas. Hooters. Boobs. Yes, I think I understand now. The record companies were afraid of mammaries in the 80’s. Covered, uncovered – doesn’t matter. Put a pair on an album cover and BAM the next thing you know, you go from selling a picture of a nice hefty pair of sweaty breasts to selling a picture of a sweaty, heavy duty Hefty garden and leaf garbage bag. I bet it was an older 60 something female album cover police officer with a flat chest who nixed this one. I could see if she was wearing “Slippery When Wet” on a pair of underwear, but it’s a t-shirt with a couple of glory holes. What’s more, she’s hardly showing any of her breasts at ALL. You see more skin on the cover of Sport Illustrated every month. In the 80’s no one ever nixed the cover of Sports Illustrated or Cosmo with Cindy Crawford wearing a pair of band-aids and a string up her ass. The feminists would have been up in a dither over that, but Bon Jovi can’t have a nice hefty pair of completely covered yabos on their album? The scary thing is that Slippery When Wet is probably one of the top selling pop rock albums of the 80’s (if not current) and they did it with the picture of a sweaty Hefty bag. You know what this means don’t you? It must have been the music.