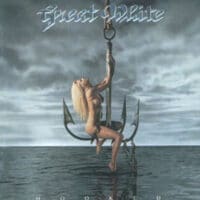 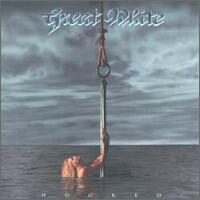 Skid’s Comments:
Jack Russell once said that if the band had decided to cut the arms off the model on Hooked that the cover would have been considered art as opposed to offensive, and he is right. I’ve always loved this artwork, even the censored version, it is simple but effective. I can see why this cover was revamped, nudity is a no-no in American society. But I have to wonder if the model was fully clothed yet impaled on the hook if everything would have been acceptable? For those of you that are single, the next time your mother tells you that there are lots of “fish in the sea” just remember that they have to be fully clothed.

Raving Maniac’s Comments:
Oh come on! What’s wrong with THIS!? What’s really sad is the original cover is really pretty cool, mostly because of its simplicity. The final cover is stupid – stupid. It looks like a big picture of the sky with some junk that got caught in the front of the camera – stupid. Why did lowering the woman’s ENTIRE BODY into the sea make this better? You can’t even see the hooks on the anchor! Did the record cover police believe the Great White audience didn’t know what bare legs and arms look like? Was it to say that the Great White audience should not be exposed to bare arms and legs? Considering this is a profile, I should restate that as “ARM and LEG”. All they had to do was make her arms lower to cover the ONE breast you can see (from the side!)…done. I would sue if I were Great White. They should have just said “fuck it” and done a Beatles – gone with a sold color. Maybe Blue? Great White – The Blue Album. Almost anything is better than what they ended up with.