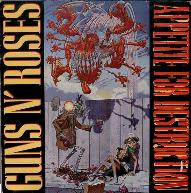 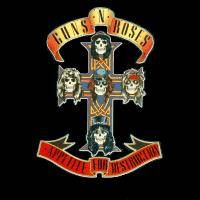 Skid’s Comments:
Supposedly the girl in this picture has been raped or is about to get raped. I’m not sure, maybe this woman just has an alien (is that what those creatures are supposed to be?) fetish? Or maybe she likes her sex rough, who am I to judge? What this artwork showed was that even a cartoon nipple was one nipple too many. Thankfully Guns N’Roses didn’t take the easy way out on the uncensored artwork, as they still managed to piss a few people off. The free publicity created from these covers and of course their obscene music helped push the band to the stratosphere. In this case a healthy dose of censorship helped make the band, thanks.

Raving Maniac’s Comments:
I have to ride the fence on this one. I mean, Anime was popular in the 80’s (have you ever watched an “Akira” video?) and comics were popular in the 80’s (Heavy Metal anyone?) so saying that this cover which is both animated and comical is offensive it sort of stupid. Yet, you can’t take a gross concept or lead your audience to believe something without coming right out with it…in this case, to me, it looks like either a rape or assault on a woman – animate it and think it’s going to be any less offensive. I bet had the female skeleton not been bloody on her ass with her underwear around her ankles, this cover would have been the final.