Censored – Lita Ford’s Out For Blood 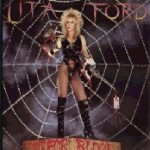 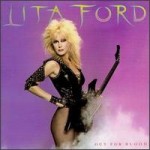 Skid’s Comments:
OK, what anal retentive retread came up with this censorship gem? This album almost didn’t get released because of the cover featuring Lita standing in front of a spider’s web holding a broken blood spurting guitar. I thought violence was acceptable in America? Perhaps we draw the line when it comes to guitar violence. If that were the case Pete Townsend should be on death row! But he isn’t, so violent crimes against instruments can’t be that big of deal. Could the censors have got their panties in a bunch over Lita’s wardrobe? That could be it, because she looks great. So I’m thinking that if you mix sex with violence you’re gonna run into trouble – this stuff is all so confusing.

Raving Maniac’s Comments:
What’s the reason they banned the 1st cover anyway? She’s standing in front of a spider web. So what. If anything they made it worse. It looks like she’s popping big guitar penis wood in the re-issue. Lita the Tranny. Doesn’t do much to uphold the sexy image does it.