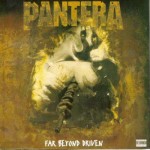 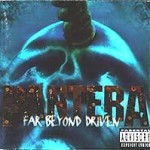 Skid’s Comments:
I’ve always heard rumors that Phil Anselmo was gay (I have no idea how true that is though), but even if he was would he really enjoy a huge drill bit shoved up his ass? There is no doubt that this artwork deserved the boot, but even the approved cover wasn’t much better. It just goes to show that anything to do with violence is acceptable, but anything of a sexual nature is outlawed – I’ll never understand that. Anytime I see the original artwork I keep thinking of a George Carlin quote, “No one should ever have any object placed inside their asshole that’s larger than a fist and less loving than a dildo”.

Raving Maniac’s Comments:
At first glance you don’t even know what the hell the 1st cover IS. Even up close I wasn’t sure, but it looks like an ass with a drill shoved inside. I have to wonder why anyone would even want this as their CD cover. I have heard rumor that Phil Anselmo is a wee bit, shall we say, anal favored? If I were Pantera’s record company I would bitchslap whoever made the decision to go ahead with this cover in the first place. It’s a waste of money. Unlike a few other albums that might be “pushing the line” wouldn’t common sense tell you there is no way in hell your record company is going to let you release an image of a drill shoved up someone’s ass? No wonder it’s such a shitty blurry image. It’s like they were saying “Hey if we blur this image of an ass with a drill, I bet we can sneak it by.” As if per chance the artwork police were going to look at this and say “Oh yes, a blurry picture of nothing…….print a million.”

Now that final cover. A drill through a skull…wow, how edgy eh?