Censored – Poison’s Open Up And Say…Ahh! 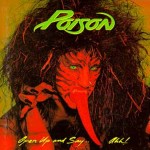 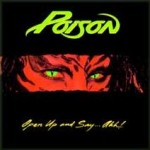 Skid’s Comments:
In hindsight this should have been a clue that the metal movement was about to die. If a cover like this has to be censored it is pretty obvious that the target audience of hard rock had changed. This is insane, what the hell is offensive here? What is being shown that you’d be unable to see in a Broadway production of Cats? By looking at the acceptable version it is clear that the tongue is the offensive part here, well if that’s the case why hasn’t someone slapped a paper bag over Gene Simmons head years ago? This is stupid and just further proof of what ridiculous lengths the censors will go.

Raving Maniac’s Comments:
Why would you censor a Jersey Girl in her weekend gear? Walk down the Boardwalk or the Jersey shore any Friday night in August. The Poison girl is a dime a dozen, even in 2005. To censor her is against the natural laws of the East Coast and it isn’t like she’s speaking. If that were the case, banning would be justified.