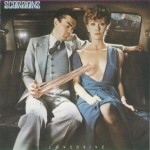 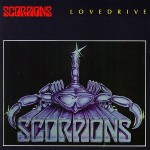 Skid’s Comments:
The Scorpions are at it again. But this time the banned cover in question is rather harmless. A little bubblegum on a breast never killed anyone…messy maybe, but no cause for alarm. Maybe certain people thought the man on the cover was ogling her breast, but it looks to me like he is just figuring out a way to clean her up without offending her. It’s just another case of a male acting like a gentleman. Of course the censors didn’t look at it that way. But really, the woman had her dress half off in a bumpy car – what did she think would happen?

Raving Maniac’s Comments:
I don’t agree the cover should have been banned based on its offensiveness. I agree it should have been banned based on its ridiculousness. It looks like the guy is pulling a wad of gum off his dates can! Like maybe they were riding along and being that he’s a Jersey DOOOD, he was chawin some bubblicious and it got away from him, so he says “Lemmie get dat off ya b’fore it rooens ya dress.”

The re-issue is way better. It’s the kind of cover that isn’t going to be so dated anyway.