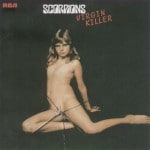 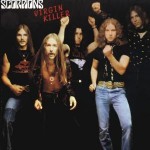 Skid’s Comments:
If ever a mainstream album needed a face-lift this is it. This cover is indeed in bad taste and the thought of someone enjoying it makes my skin crawl. The band has stated that the artwork was the brainchild of their record company, I guess they were using the “any publicity is good publicity” theory in getting the Scorpions name out to the public – and it worked. This was the first of many Scorpions albums to get censored in America but thankfully the others weren’t as crude. The look of the uncensored artwork isn’t much better, but at least the guys are clothed and of age.

Raving Maniac’s Comments:
This cover is “offense” at it’s finest. The Scorpions should be attacked with the drill from Pantera’s “Beyond Driven” album for trying to put this out. This is just downright sick. How can grown men actually think this is a cool concept for an album cover? A naked child with cracked glass over her genitals. Oh yeah that’s great. What’s more, the parents of that little girl should have their asses kicked for ever letting her pose for this to begin with. I guess it goes to show there’s a fine line between “art” and “obscenity”.