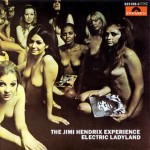 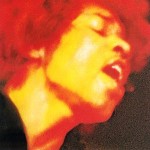 Skid’s Comments:
A black man releasing an album covered with topless women, well you just knew this one wouldn’t fly. It was unacceptable even in the late 60s when these conservative nuts were tripping on LSD and passing out free love like it was a complimentary gift on a TV infomercial. Jimi might have got away with this if the women kept their clothes on but had their necks and wrists slit instead, but that isn’t my image of ladyland. This is just one of many covers that got the shaft because of a little nudity, although the trippy image of Jimi on the substitute cover is pretty cool itself. I guess everyone wins on this one.

Raving Maniac’s Comments:
The only thing wrong with the original cover is there isn’t one set of cans bigger than a 32A. If you’re gonna have bare breasted woman on your album cover, make it worth it. What do naked women even have to do with “Electric Ladyland” anyway? Who knows, at least Jimi gave it a shot. I have to say I’m pretty surprised this cover would be banned at all. Considering it was released during the same era when the Ohio Players were releasing albums with artwork far more “offensive” than flat chested hippy chicks. I wonder if the record company realized how much it looks like Jimi is having an orgasm in the re-issue?