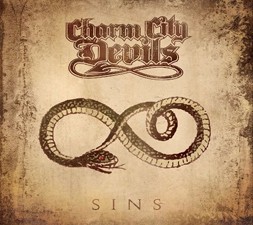 From the working-class streets of Baltimore, Maryland, Charm City Devils reemerge with their newest release ‘Sins’ on April 1st.

This quintet’s second full length effort finds them adding harder, edgier tones to their blues based roots. The result of the band’s life experiences over the past few years, Charm City Devils’ new release features an aggression and energy that hits you right between the eyes. From the first note of “Spite” to the last cymbal crash of “Unstoppable”, ‘Sins’ showcases the bands power, directness and new found energy and intensity.

Frontman John Allen explains, “When we came off of the road at the end of Cruefest 2, we all felt so pumped and excited to keep moving and growing. We were so blown away at the reaction that we didn’t want to lose that creative energy. We started laying down tracks and ideas for this record almost immediately.”

“Everyone has ups and downs — that’s life. I have played music my entire life. I’ve been a professional musician since I could carry my gear and have seen and experienced what this industry, ‘good and bad’, has to offer. We wanted ‘Sins’ to be deep with songs that people can relate to. On this record I wanted to put it all out there! Songs about love, anger, revenge and all the emotions that I was feeling. Expressing what I, and everyone in this band, had been through. These feelings are universal. They touch everyone and we used our experiences to put together a powerful statement that we believe listeners can connect with.”

In August Charm City Devils went into Sound Kitchen studios with Grammy winning producer Skidd Mills (Saving Abel, Egypt Central). About the process, Allen reflects, “Our previous record had been a compilation of songs I had written and recorded over a two to three year period. It was recorded in a couple of different setting and tracked by a few different people. This time we went into one studio with one producer to give the record a cohesive sound and direction.”

“When it came to giving the record a title we wanted something that hit a nerve. We have five different personalities in this band and it can sometimes be a challenge to agree on one idea. The one thing we all could agree on is in one form or another we have all sinned. Some of us more than others” Allen chuckles.

Charm City Devils where discussing classic songs and if they should incorporate something into their set. “There were many ideas kicked around, but which one? “Man Of Constant Sorrow” came up and we decided to give it a try. It’s an incredibly powerful song but it was a challenge to develop and arrange it in a way that would capture the essence of the song but would ROCK! We all loved the version from “O Brother Where Art Thou?” Skidd and I built a foundation and with much tweaking and editing I think we delivered a great version of the song. The song transcends generations. It’s a timeless classic and it’s been around a long time and and I’m excited to bring it to a whole new group of rock fans.”

Not ones to completely forego their love of the blues, the band included the song “Devil Is A Woman” a subject matter speaking directly to the album title. Other songs like “Walk Away” and “Love N War” showcase their influences and craft the music in a direction that shows depth and the commitment to making a great CD.

Allen elaborates; “All You’ll Ever Need” was written a few years back but never released. It’s a slight departure from the overall record. We played it for a few close friends and the instant connection they had to the song made it clear we needed to put it on ‘Sins’. It’s a great way to finish the record. For all the darkness, anger and vengeance that fills the album, this cut speaks to love. Maybe it’s some form of redemption?”

“I buried a lot of feelings deep inside me and carried those conflicting emotions around for a long time. As I wrote this record it gave me the opportunity to bring those consuming emotions to the forefront and deal with them. I’ve always used music as an outlet for my feelings and has helped me get through some dark times in my life. I hope that these songs connect emotionally with our fans, old and new, and give them the same release from the burden of their ‘Sins’.”