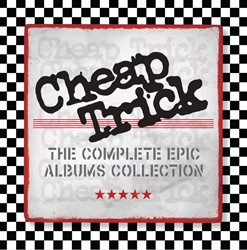 The best of Cheap Trick all in one amazing bundle called ‘The Complete Epic Albums’ is now available for pre-order at Popmarket.com.

The collection consists of ‘At Budokan: The Complete Concert’, the expanded two CD version of their breakthrough 1978 live album, the rare ‘Found All the Parts’ EP, on CD for the first time in the U.S., an “Authorized Version” of ‘Next Position Please’, available for the first time on CD, and newly mastered versions of ‘One On One’, ‘Standing On The Edge’, ‘The Doctor’, ‘Lap Of Luxury’ and ‘Busted’, available exclusively within this box set.

Besotted by the British Invasion, Cheap Trick took the music of their UK heroes and transformed it into something uniquely American. While lead guitarist Rick Nielsen has humorously described the band as “four great guys with three great chords,” they are much more than that.

From their hometown of Rockford, Illinois, Cheap Trick has taken their inventive, high-energy brand of rock to every corner of the globe, selling over 20 million albums and amassing devotees from Kurt Cobain to Homer Simpson. ‘The Complete Epic Albums Collection’ gathers their seminal recordings in one essential, exhaustive package.

After all, songs like “I Want You to Want Me,” “Surrender,” “The Flame” and “Dream Police” don’t just live on the radio — they live inside of your head as well.