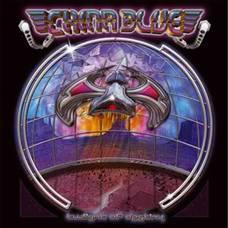 CHINA BLUE’S DEBUT ALBUM ‘TWILIGHT OF DESTINY’ TO BE RELEASED ON DECEMBER 15TH:

Frontiers Records is pleased to announce the release of CHINA BLUE debut album “Twilight of Destiny” on December 5th 2008.

The roots of CHINA BLUE date back to the late 80’s when keyboardist Eric Ragno (Takara, Ted Poley, Steve Grimmett, American Angel, Danny Vaughn, Hugo/Ramos and countless others) started a new band called China Blue with his best friend Tom Gasbarro. Eric wrote the music and Tom was the lyrical engineer. The songs written at the time used to explore those avenues of defining moments… decisions that were made in the “Twilight of Destiny”. According to Eric, “It is where you either won the girl or lost it all in a sea of regret; the pivotal epiphany that the thing you love most just got away. We did things on our own terms and even after Tom moved on, I swore I would pick it up again one day”.

Eric’s career gained momentum with bands like Vox Tempus and moved in a different directions until he played some of the old China Blue demos to his friend Michael Riesenbeck. Michael encouraged Eric to take the best out of the songs and add new material to round out a complete album. He and Eric co-wrote some great songs together and he pushed Eric to start the job to put together a recording line-up for the album and just go out and do his own thing.

On vocals, Eric recruited none other than the new TNT and former Shy singer Tony Mills, a legendary voice that added a special touch to the recording. As soon as Riesenbeck stepped out of the project, Josh Ramos (of The Storm, Hardline) immediately took the chance to be part of the project. Eric and Josh had already worked on a number of projects together (Ramos/Hugo, Los Angeles) and the pair spent several weeks together writing in San Francisco. Zane Petersen (Malicious, Conditioned Response) was a long-time friend of Eric’s who helped him in various career circumstances and was the perfect choice with his powerful drumming. The final piece of the puzzle was Doug Odell on bass, he came about at the MelodicRock.com festival in Chicago during 2008 when he and Eric played in front of an amazing crowd with the “Melodic Rock All Stars” band.

“Twilight of Destiny” was produced by Eric, mixed by JK Northrup and took shape as a true Melodic Rock masterpiece during 2008, under the direction of executive producer and manager Ron Vining. This record is an absolute delight for all fans of classic Shy, Journey and The Storm music with a slight Progressive edge. The classic 80’s album artwork was designed by Wavid.

“This China Blue record has truly been a journey for all involved” concludes Eric Ragno. “We hope the music touches you in some way as it helped us explore who we are, when we faced those defining moments in life at the Twilight of Destiny”.

Tracklisting: (click song title for audio sample)
What Do You Need But Love
I Feel Like Dying
Changing Ways
So Wrong
Don’t Be A Stranger
Crimes (of Passion)
Passions
Movin’ On
Twilight of Destiny
Lost
Take Me As I Am
A Last Goodbye