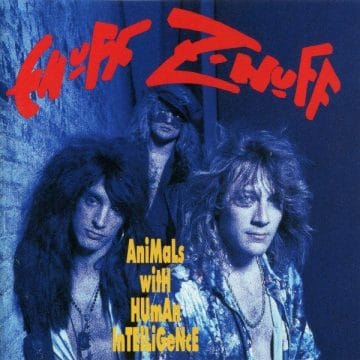 In terms of Foxx‘s departure from Enuff Z’Nuff and getting airbrushed off of an album cover, Z’Nuff indicated (as provided by The Chuck Shute Podcast with slight edits):

“Now, we weren’t mad at him. We were disappointed. How’s that? See, Vik looked at Mötley Crüe like we look at The Beatles or Queen. So I get it. You had a wonderful opportunity right there. You just got a payday from the Animals With Human Intelligence record. Clyde [Davis] was very generous to us. Everybody went their way. We’re all happy that we’re going to make a record and have a budget. And it was just in his best interest. He thought to just go out and play with Vince [Neil] and Steve Stevens. Two fabulous musicians and with a great record deal and a lot of history — I can’t be mad about something [like] that. Disappointed, for sure. We went through about 250 VHS tapes, looking for the next drummer to replace him because he’s a great guy. When he left,  he sold the show too because he’s really fabulous on stage as well. He didn’t write the songs and never did, never claimed to do that, but [he was] a fabulous drummer who brought a great show every single night and was my roommate for all those years in Enuff Z’Nuff.

And we’re both Virgo brothers so I was happy that he was with the band and when he sashayed, of course there was disappointment but we ended up hiring Ricky Parent. He looked like Nicolas Cage from the 30th row so we got a good looking handsome guy to come in there and play the shows and was solid rock on drums. He did a bunch of stuff earlier with Alice Cooper and some earlier projects. So he had a little bit of a name for himself and even though it hurt us, it was a sting, we weren’t cantankerous about it. We weren’t jealous at all because we always thought Enuff Z’Nuff had better songs than those bands. I will say though, when he did sashay, the record company, it was their call. It was Clive Davis who had him brushed from the album. We liked his look and we liked being a four piece. But it was [inaudible] who said to my manager at the time, Herbie Herbert and Bob Brigham, ‘We’re not putting anybody on the cover to stand in the band.'”

Enuff Z Nuff‘s “Right By Your Side” video (from the Animals With Human Intelligence album):