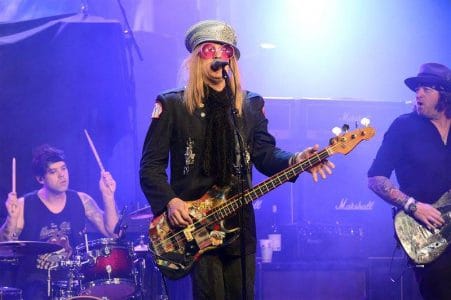 There is no secret that certain Enuff Z’Nuff band members have done their share of partying and drugs over the years. Enuff Z’Nuff frontman Chip Z’Nuff was recently interviewed by Metal Mike (no relation to Sleaze Roxx writer Metal Mike) for the 80’s Glam MetalCast podcast. Chip Z’Nuff was asked about the wild partying that took place while Enuff Z’Nuff recorded their debut self-titled album, which was released back in 1989.

Chip Z’Nuff indicated (as transcribed by the 80’s Glam MetalCast with slight edits): “I remember one night we went out to the horse stables and we took a horse. We walked him through the drive thru and ordered food. We got in a lot of trouble for that. We snuck the horse into the hotel room after we got our dinner. The horse shit all over the hallways, we had [to] push his head through the door to get him in. We love horses and we love animals. We got fined tons of money and the cops were all over us for that.”

In terms of the follow up album to 2018’s Diamond Boy coming out later this year, Chip Z’Nuff advised: “Our new record is going to be a juggernaut. I’ve got Ace Frehley on there, Mike Portnoy on a track, a couple guys from Cheap Trick. We got some good guys that wanted to sit in with us because the songs are that strong. I think it’s one of our best albums to come out in years.”

You can listen to the interview with Chip Z’Nuff by the 80’s Glam MetalCast below.

In this episode I talk to the main man from Enuff Z’Nuff – Chip Z’Nuff. We talk about the next Enuff Z’Nuff album, past members, and some crazy 80’s stories!…