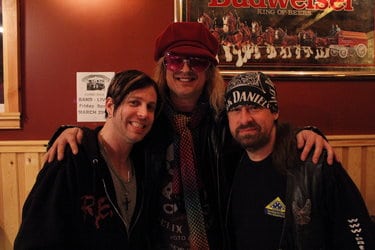 After two years of shooting, almost 300 hours of footage, and over 40 interviews, the film ‘Attack Of Life: The Bang Tango Movie’ is nearing completion.

Director Drew Fortier recently sat down with Enuff Z’Nuff bassist Chip Z’Nuff, who has been working on a solo album called ‘The Death Of Harry Potter’ under the name of Johnny Rotten Jr., in a conversational setting to be featured in the film. Joining the duo for the interview were current Tuff and former Bang Tango drummer Trent Anderson and KAT 105.5 radio personality Walt “The Freak” Kozielski

“It was one of the most amazing, honest, funny, and insightful interviews I have done so far,” Fortier tells SleazeRoxx.com. “They covered everything from their personal opinions and insights on the music business’ past, present, and future, major labels, tour stories, Bang Tango, and many other topics. I am extremely proud of this interview.”

Fortier plans on having a rough cut of the film — which also features interviews with with current Joe LeSte fronted line-up of Bang Tango as well as former members Mark Knight, Kyle Kyle, Kyle Stevens and Tigg Ketler — done by late spring and is aiming for an L.A. premiere around July or August.

“Its gonna be a fun film,” Fortier continues. “The band’s story is very unique, which is why I was drawn to it in the first place. The film will have a great sense of humour but at the same time be very bittersweet in a way… even heartbreaking at times.”

Stay updated on The Bang Tango Movie by visiting their Facebook page at www.facebook.com/BangTangoMovie.

Meanwhile Enuff Z’Nuff will be setting sail on the Monsters of Rock Cruise this week, followed by a tour of the UK in April, before gearing up for a new record. A complete list of Enuff Z’Nuff tour dates can be found at www.enuffznuff.com. Trent Anderson and Tuff are also hitting the road, beginning their spring tour on April 24th in Cleveland, Ohio — more information is available at tuffcds.com.