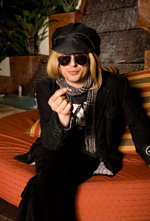 Chip Z’Nuff, bassist for Chicago born power pop outfit Enuff Z’Nuff, will be an in-studio guest this coming Monday, January 16th on the world premiere of ‘The Jungle’.

The Jungle is a new hard rock radio show featuring 80s hard rock that will air live every Monday night from 9:00 pm to 11:00 pm CST on WXAV Radio, streaming live globally at www.wxav.com and at 88.3 FM in Chicago. Chip’s in-studio conversation with host BC is scheduled to air live during the first hour of the January 16th show.

“The Jungle is going to give airplay to the hard rock music that Sleaze Roxx fans love and that is often neglected by commercial radio. Enuff Z’Nuff is one of the great rock bands that does not receive the credit it deserves. Because The Jungle will celebrate great hard rock music every Monday night, I am honored to have Chip join me in the studio during The Jungle’s premiere,” states BC.

WXAV is the award winning radio station of Saint Xavier University located on Chicago’s southwest side just minutes from where Enuff Z’Nuff began its successful and ongoing career back in the 80s. Find ‘The Jungle’ on Facebook at www.facebook.com/pages/The-Jungle-WXAV-Radio-Chicago-IL/308709089172644.

Enuff Z’Nuff is currently on break from a series of dates that resumes with a show on January 27th in Tacoma, Washington — www.enuffznuff.com.