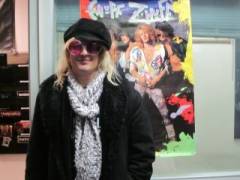 Chip Z’Nuff To Appear On WXAV Radio This Monday

Influenced heavily by the Beatles and Cheap Trick, Chip Z’Nuff has not only had a successful 25-plus year career with Enuff Z’Nuff, but he has been involved in many side projects over the years — including the recent collaboration with original Guns N’ Roses drummer Steven Adler, as part of Adler’s Appetite.

In his last two interviews on ‘The Jungle’ with BC, Chip discussed Enuff Z’Nuff’s early days on the hard rock scene and impressive rise to fame in the late 80s/90s, Guns N’ Roses’ selection for the Rock and Roll Hall of Fame, his appreciation for the fans who continue their support during tough economic times, as well as his revealing that a book, TV show, and Enuff Z’Nuff musical anthology are in the works!

Don’t miss BC with Chip Z’Nuff Monday, March 19th, live from 9pm to 11pm CST on WXAV – 88.3 FM Chicago and streaming at www.wxav.com. Also be sure to visit ‘The Jungle’, a weekly non-profit and non-commercial radio show specializing in hard/sleaze rock and hair/glam metal, on Facebook at www.facebook.com/pages/The-Jungle-WXAV-Radio-Chicago-IL/308709089172644.