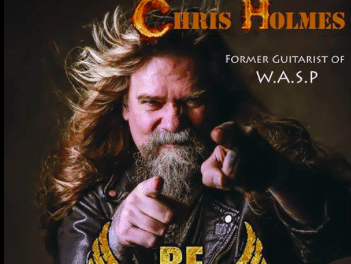 Former W.A.S.P. guitarist and Mean Man frontman Chris Holmes was recently interviewed by his wife Sarah-Cathy Holmes in the “Pool Interview 2.0” which is a kind of a remake of the guitarist’s infamous 1988 pool interview that was featured in the documentary film The Decline Of Western Civilization Part II : The Metal Years. 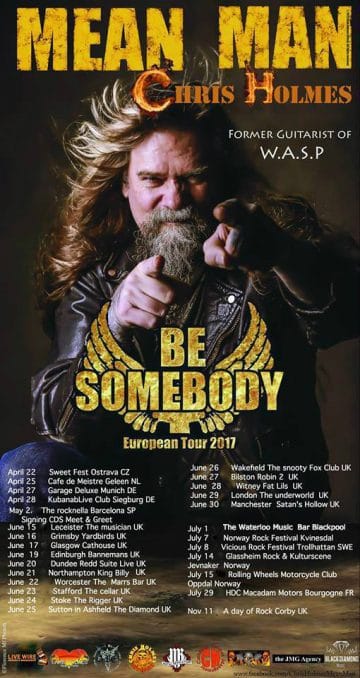 The following is an excerpt of Metal Revelation’s press release:

“It is probably one of the most memorable interviews done in Metal history, the “Pool Interview” legendary ex-WASP guitarist Chris Holmes did in 1988 for the documentary film “The Decline Of Western Civilization Part II : The Metal Years“.

Till today, the older generation remembers this interview and the younger generation gets familiar with it. Nobody gave Holmes a chance to survive with the lifestyle he had. He wouldn’t survive the music industry and many even feared for his life.

Although we are almost 30 years later, a lot of people still see Chris Holmes as the guy they remember from the ’80’s …

… but a lot has changed! Holmes is still there, alive and kickin’ and touring the world with his band Chris Holmes‘ Mean Man. You even might can state that he is happier than ever before and lives to be on stage where he belongs and proves this night after night while being on tour.”

Holmes‘ “Pool Interview 2.0” (see video below) starts off with the same questions that he was asked 29 years ago (as transcribed by Sleaze Roxx):

Sarah-Cathy Holmes: When you were a little kid, did you want to be a rock star?

Chris Holmes: Playing music? I love touring. I wish that I could go on the road and never come home.

Sarah-Cathy Holmes: How many gold records do you have?

Chris Holmes: I don’t know. Five, six, nine, eight, fifteen… Who gives a shit? Would it matter if I had a thousand? You know, I really don’t know. They’re all sitting in a box somewhere in California.

Sarah-Cathy Holmes: How do you consider yourself?

Chris Holmes: A human being. A good person, reasonable. You know, I don’t like to hurt others. I only like to hurt people that deserve to be hurt. You know…

Sarah-Cathy Holmes: Does it bother you that this lifestyle is dangerous to your health?

Sarah-Cathy Holmes: How old are you?

Sarah-Cathy Holmes: Do you drink very much?

Chris Holmes: Do I drink very much? You have to drink something to stay alive. I drink Diet Pepsi, Gatorade, Powerade. I hate the water out of the tap. I like sparkles. If you’re asking about alcohol, no, I don’t drink alcohol anymore.

Sarah-Cathy Holmes: When did you stop?

Chris Holmes: A long time ago.

Sarah-Cathy Holmes: Do you remember the date?

Chris Holmes: Yeah. February 6, 1996. Why do I not drink anymore? After six DUIs, you get thrown in jail. And it’s truly hard to drink in jail. And they’re going to make you quit. Or they lock you up.

Sarah-Cathy Holmes: What did you leaner by trying to stop?

Chris Holmes: Well, I learned that when somebody’s drunk, they don’t do too much that’s really constructive. They’ll have a fun time but they’re not, they’re not that smart. Drinking turns me into an idiot. A lot of people like to be idiots. I used to be probably one of the biggest ones there was. But you get older… Things change you know. When I stopped drinking, I’d see all my friends drinking, they’d turn into idiots. I was the one leading the pack anyways so I am not one to talk about being an idiot.

Sarah-Cathy Holmes: Do you think that this rock n’ roll lifestyle turned you into an alcoholic?

Sarah-Cathy Holmes: You think it’s you or every rock star doing…

Chris Holmes: I can only speak for myself. I don’t know how other people handle their problems.

Sarah-Cathy Holmes: How do you consider yourself today in 2016?

Chris Holmes: A white male human on the third rock in the sun.

Sarah-Cathy Holmes: Are you happy now?

Sarah-Cathy Holmes: Do you think you’ve changed in the last 30 years? Your mind, the way you see life? The way that you see the world around you?

Chris Holmes: It doesn’t bother me now when I get pulled over by a cop. I give them shit back now. But then, when I was drinking, I was all worried about getting caught being drunk. But nowadays, I’ll ask them why they pulled me over. I’ll give them crap back you know. But where I live now, I don’t live in California and I haven’t been harassed by a cop here. In Europe, they don’t harass you the same as they do over there. It’s one thing I do miss — being harassed by the cops you know.

Sarah-Cathy Holmes: Is there any advice that you would give to the younger generation?