Former Megadeth guitarist Chris Poland was recently interviewed by Neil Turbin for Canada’s The Metal Voice. Poland played in Megadeth from 1984 to 1987, and played on the band’s first two albums, Killing Is My Business… And Business Is Good! (1985) and Peace Sells… But Who’s Buying? (1986). Poland ended up also playing guitar on the demos for the record Rust In Peace (1990) and he also handled guitar duties on the album The System Has Failed (2004). 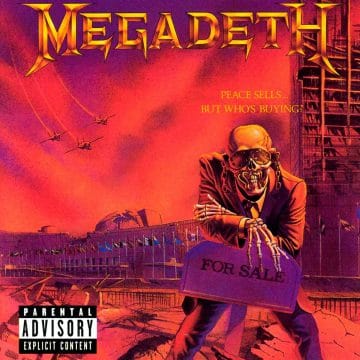 In terms of the recording budget for Killing Is My Business… And Business Is Good! and where the money really went, Poland indicated (as provided by The Metal Voice with slight edits): “First of all, when we got any money, it was in Dave‘s [Mustaine] account. We got a per diem. We got 100 bucks a week. This myth that the first record was spent on drugs is bullshit. We only had about $6,000 or $8,000 to make a record and we made it in a couple of weeks and drugs aren’t that expensive. We weren’t even that far gone then. Also if it wasn’t for Cliff Culteri, I wouldn’t have gotten solos on the first record. He asked Dave [Mustaine] to give me solos because I wasn’t going to get a bunch of solos. I thank Cliff for that. Rest in Peace. Even Peace Sells, I think our budget was $26,000 but we were in really nice studios. We still had our $200 a week that we lived on.”

With respect to his time after Megadeth, Poland stated: “I was bussing tables from midnight to 10:00 am at Denny’s after I left Megadeth. I would be bussing tables on a weekend and some guy would go, ‘Dude, you’re Chris Poland [laughs] and I would have to go ‘Yeah, I am.’ It is so weird because he just looked at me like ‘What the fuck are you doing here?’ I would just say ‘Hey man, I got to eat, I got to pay the rent.’ When you think about it today, it is pretty crazy because Megadeth was beyond gold. Peace Sells was really like a train and here I am bussing tables in the middle of the night at Denny’s. [laughs]”

In regards to whether he made the with decision in leaving Megadeth, Poland opined: “It was just meant to be. It got to the point where, it was time. It wasn’t working for anybody anymore so who knows what would have happened if I stayed in the band. It was probably best that I didn’t.”

You can listen to The Metal Voice‘s interview with Chris Poland below: