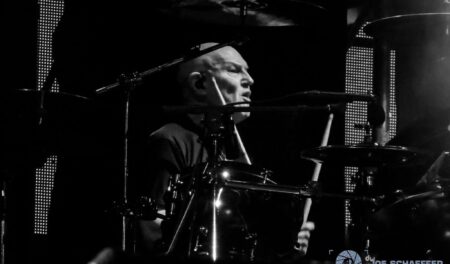 Former AC/DC drummer Chris Slade was recently interviewed by Andrew Daly for Ultimate Guitar. Slade played on the AC/DC‘s 1990 album The Razors Edge alongside rhythm guitarist Malcolm Young, lead guitarist Angus Young, lead vocalist Brian Johnson and bassist Cliff Williams. Slade was in the band from 1989 to 1994 and again from 2015 to 2016. 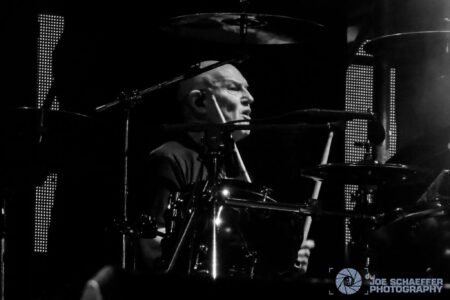 Slade was asked whether Malcolm Young and Angus Young allowed him to write his own drum tracks or whether he was simply told what to play to which he replied: “No, it was scratch demos. Everybody gets those, even Brian and Cliff [Williams]. Before the recording sessions started, Angus and Mal would do demos, and that would bring them in to the rest of the band. Once we had them, we were told what to play, and we learned them and rehearsed them to death. We would do all of that, and that was it. Those same demos were the basis of the record, and it was all preconceived by Angus and Mal. There was no room at all for me to deviate from that, and I wasn’t going to try.”

Daly noted that Slade brought an unmistakable energy to AC/DC that wasn’t there before. The drummer noted: “You know, people always talk about how I upped the tempo of AC/DC, or that I sped the band up. It’s not true, and I’ll tell you why – all the tempos were set by Angus and Mal. I was never in a position to make those types of changes, and if I did, I am sure they would have had something to say about it. [Laughs]. The tempos were always set by them, to the point that I had a red flashing light that would cue me in. Now, I didn’t play to that flashing light, but what I did do was I counted into the song from that flashing light. In concert, I’d see the flashing light, and be inside my head, ‘Okay, one, two, three, four,’ and then bang, we were off.

I never played to a click track at all. I never did because I’ve found over the years that I don’t need a click track. If I ever was dealing with a click track, I never played to it, I would always lead it instead. If you’re a drummer – a good drummer – and you don’t lead the click track, well then, you’re not very at all, are you? It’s no good if you do that because then you can’t change the tempo. It’s got to be all in time when you play to click track. I’ve met a lot of drummers who are not very good timekeepers, and I was great at that. I am great at that. With AC/DC, those tempos from around that time period were all set by the Young brothers, and if they were faster-paced, then that’s what Angus and Mal wanted. They set the tempos, and I just kept time with them.”

You can read the rest of the interview with Chris Slade at Ultimate Guitar‘s website.