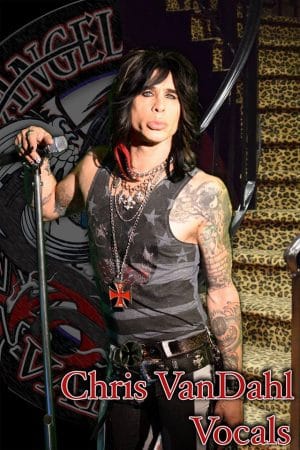 VanDahl answered the following when asked what his time was like in L.A. Guns:

“It was a total grab bag. Some of the best and most challenging times of my life to date. When I joined the band they were already well-established and the fans definitely had certain expectations. When Tracii (Guns) asked me to join, he told me that they had essentially broken up. He was already moving on and establishing Killing Machine but said that if I was willing to join they would keep the band together and move forward. At the time I was fronting a band called Boneyard. It was one of those groups with amazing chemistry but because of internal issues was always just on the verge of breaking up. Musically we were somewhere in the middle of Mother Love Bone and GNR and I’m pretty sure that’s what Tracii was drawn to. So after he brought the rest of the band down to see me perform and they asked me to join and I said yes.

What I didn’t foresee at the time was how drastically Tracii’s vision for the band had changed. I had it in my head that we are going to make this killer rock record and it turned out to be a completely different animal. In hindsight I think it was more of an experiment that anything. Trac’ saw what was on the horizon with the change in music and was trying to reinvent the band to get out ahead of the curve. In theory it was brilliant but in reality it was more of a disaster. Things are always changing especially in music. The old fans wanted what was familiar and comfortable and the potential new ones we’re too busy discovering recent artists to care very much. It’s not that it was bad, it was just too much of a departure from what made them great in the first place. I think Kelly Nichols saw it coming. He left the band early on which is when we became a four piece. For the record I think Kelly pretty much took all the cool with him when he left. I also think as much as I wanted it to work, in the back of my mind I knew better. Probably, we all did. For what it’s worth I’ll say this. “Those guys are definitely some of the most talented musicians I’ve ever had the fortune to play with. I learned a lot from that experience and my years with them and I wouldn’t trade it for anything.””

VanDahl commented as follows on his departure from L.A. Guns:

“Originally leaving the band was my choice. I called them up and explained that I didn’t feel like it was working and told them I believed it would be best for everybody if we went our separate ways. They called me back and said let’s meet about this. Of course I said OK. We got together and there was a lot of talk and heartfelt feelings. They asked me to stay and I decided to give it one last shot. About two weeks later I got a phone call from Tracii telling me I was out of the band. I think after he hung up I just stared at the phone and started laughing. Not so much because it was funny but more because it struck me as so surreal.”