Former Quiet Riot bassist was recently interviewed by Mick Michaels for The Cosmick View. Wright was promoting his new project Chuck Wright’s Sheltering Sky, which will be releasing an album by the same name in 2022. 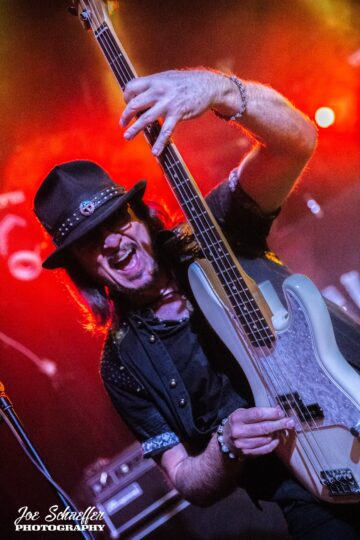 In terms of whether his fans will be surprised wth the wide range of musical styles on his new album, Wright opined (with slight edits):

“I would think that most people will expect a “Classic Rock” stylized record from me because of my years with Quiet Riot, and yes, they will be surprised, but those fans out there that really know my body of work having co-produced two reggae albums, an Ambient Trance album, my very eclectic band projects Magdalen, Odd Man Out and Chaos Is The Poetry, and others, will know this album will be very different. My roots are in prog, really. I had one of the top drawing bands in Los Angeles in the late ’70s called Satyr. Truly a prog band in the beginning. I was the main composer. We outdrew Van Halen before they were signed. We were the first band ever to use lasers. We had a friend who worked at the Jet Propulsion Laboratory that was developing the laser technology. Our singer did many costume changes, and we had special sci-fi staging. The keyboard player, Pat Regan, went on to produce KISS, Deep Purple, Mr. Big, and others. It was a great / inventive band.”

Chuck Wright’s Sheltering Sky is loaded with guest appearances to which Wright commented: “By doing my weekly event, “Ultimate Jam Night” at the legendary Whisky A Go-Go since 2015 and bringing together 45 to 100 musicians a show, I’ve felt like an umbrella or a sheltering sky for these performers… helping new artists by putting them on stage with established pros. So many new relationships have formed, bands created, musicians getting hired by being seen at my event. I discovered the ultra-talented vocalist, Whitney Tai, this way. She sings on three of my songs and co-wrote with me. “Ultimate Jam Night” is on hiatus right now because of the pandemic, but I am hopeful we will return in January 2022. To learn more about the event, go to ultimatejamnight.com

It seemed a natural thing to include many of my friends in my vision. I would just send a track and ask what they thought, and they’d reply with wanting to play on it. That was sweet validation for what I was doing. So far, the album features over 30 guest performers, including members of Mr. Big, Skid Row, Tesla, Dream Theater, Great White, Asia, Jefferson Starship, acclaimed solo artists Allen Hinds, Toshi Yanagi, and many others.”

You can read the rest of the interview with Chuck Wright at The Cosmick View‘s website.