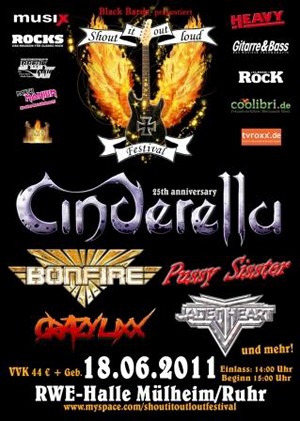 A new German festival will take place on June 18th 2011 called ‘Shout It Out Loud’, which is definitely interesting for every fan of sleaze rock, glam and melodic metal. With a line-up that consists of Cinderella, Bonfire, Pussy Sisster, Crazy Lixx, Kissin’ Dynamite, Jaded Heart, Shotgun Express and Hollywood Burnouts, the Shout It Out Loud Festival will be one of THE highlights for every sleaze, hard, glam and melodic rock fan in 2011.

Tickets for Shout It Out Loud can be purchased at www.metaltix.com, www.eventim.de or by emailing info@black-bards.de with details — more information can also be viewed at www.myspace.com/shoutitoutloudfestival.

The headliner will be Cinderella, who will be touring for their 25th anniversary; they will be playing their first and only show in Germany in 10 years! The original line-up of Tom Keifer (vocals/guitar), Fred Coury (drums), Eric Brittingham (bass) and Jeff LeBar (guitar) will be playing in the very stylish venue, RWE-Halle in Mulheim/Ruhr. The band will provide the crowd with all their greatest hits like “Don’t know what you got”, “Nobody’s Fool”, “Coming Home”, “Gypsy Road” and “Heartbreak Station”.

But their show will not be the only musical highlight of that evening. Special guests will be Bonfire, who just recently released their new album ‘Branded’ and entered the upper third of the German charts with it. Just like Cinderella, they’re having their 25th anniversary this year. The hard rockers from southern Germany are, just like the Scorpions, one of the most influential German bands in hard rock/melodic metal and nowadays more up to date than ever.

Younger representatives are part of the bill as well — ready to prove that sleaze rock is more hot nowadays than it used to back then. One of the most successful young bands is Pussy Sisster, who were announced for Wacken Open Air lately — their mission is the resurrection of the Glam/Sleaze era a la Mptley Crue und Guns N’ Roses and they are very successful with it”. They have proved that with not only with their new self-titled album, but also on several tours with D-A-D, Steel Panther and Pretty Maids. Their shows make women get wet and men rock heavily.

Ladykillers like them are the guys of Crazy Lixx from Sweden as well, who made their latest album ‘New Religion’ the program for thousands of young and old glam rock fans all over Europe. They will heat up the crowd in Mulheim perfectly with one of their rare German shows.

German-Swedish melodic metal band Jaded Heart hones the line-up; they’ve been an important part of the scene for years now, and will be rocking the crowd with their (not so new any more) singer.

Another bright star within sleaze rock heaven is called Shotgun Express. Their sound, a mixture of Guns N’ roses, early Aerosmith, Rolling Stones, paired with a hit of street punk a la Ramones with a ‘Fuck You’ attitude lets this area shine in a new light. They are known for the raw power and energy within their live shows which they have proved in lots of gigs with other acts. In Februrary 2011 they were touring Germany with the Quireboys.

Hollywood Burnouts show all the trendy bowtie rockers the extended middle finger. Wild like a muscle car, glamorous like the Walk of Fame and exciting like a night on the Sunset Strip, the band’s live shows are as legendary as the city whose name they carry. When Hollywood Burnouts crank up their amps, the fans are catapulted into a world of hairspray & champagne, sweat & leather, glamour & ecstasy.

Make sure to get your ticket, which includes front of the stage and grandstand as well so that you can either rock out in the middle of the crowd or enjoy this event comfortably seated, soon enough. Don’t miss it! Doors open at 14:30 with shows beginning at 15:00.