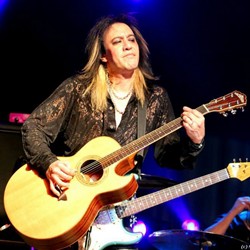 Cinderella guitarist Jeff LaBar is currently in the studio putting the final touches on his brand new solo album, which is slated for release sometime in early spring through Rat Pak Records.

The tracks on the album range from classic, early Cinderella-style hard rock, to groove laden blues-rock, and everything in between. LaBar not only sings on this release, but also does a fantastic job of capturing the magic and spirit of the classic genre he helped create.