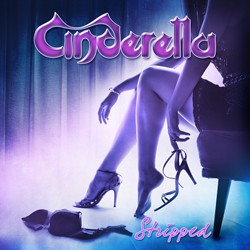 A live Cinderella album entitled ‘Stripped’, a solid collection of live tracks from Philadelphia based group, will be released on May 16th through Collectors Dream Records.

Originally released in 2001 as ‘Live At The Key Club’, the songs contained on ‘Stripped’ were recorded over the course of two nights at the Key Club, in Hollywood, during Cinderella’s ‘Unfished Business’ tour. The shows were staged on October 2nd and 3rd of 1998 and featured the original Cinderella line-up, with main man Tom Keifer out front, commanding with his tortured vocals, along with Jeff LaBar, Fred Coury and Eric Brittingham.

‘Stripped’ includes fourteen hard rockin’ and blues-based tracks from the group’s recording career and two bonus tracks recorded live in 1991. ‘Stripped’ is a quality set of live cuts that is worth checkin’ out…

Cinderella guitarist Jeff LaBar is currently in the studio putting the final touches on his brand new solo album, which is slated for release sometime in early spring through Rat Pak Records. The tracks on the album range from classic, early Cinderella-style hard rock, to groove laden blues-rock, and everything in between. LaBar not only sings on this release, but also does a fantastic job of capturing the magic and spirit of the classic genre he helped create.

Cinderella frontman Tom Keifer released his long-awaited solo album ‘The Way Life Goes’ on April 30th, 2013, via Merovee Records. The album reached the Sleaze Roxx Top 10 and the website stated, “if you enjoyed Cinderella’s last two studio albums I have no doubts that you will appreciate this very personal offering from one hard rock’s true musical talents.”