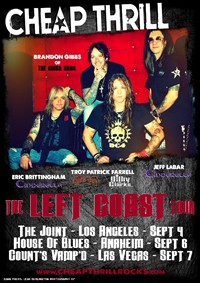 Cheap Thrill brings you a sound flavored with Cinderella tunes such as “Nobody’s Fool”, “Heartbreak Station”, and “Gypsy Road”, alongside “Hello And Goodbye” from Jeff LaBar’s soon to be released CD and “This Town”, the newest song from Gibbs’ solo record.

When Cinderella isn’t touring, Gibbs and Brittingham have always found themselves working together off and on throughout the last five years. The Nashville based Cheap Thrill made their debut on the Monsters of Rock Cruise in March of 2013, and thus started the buzz about this new band that is storming the country with their modern mix of rock and stage presence that is loaded with more energy than a steaming locomotive.

“Being able to transition from a three-piece acoustic show to an all out pumped up electric show keeps the project fun and versatile,” says Brittingham. “It’s all about the music, Gibbs adds, “We have fine-tuned a product that will appeal to audiences of all ages.”

More info can be found at www.cheapthrillrocks.com.