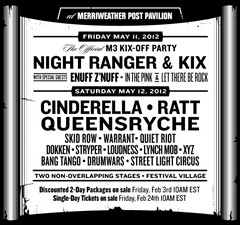 The heavy metal time machine will turn back to the 1980s and ’90s when Queensryche, Cinderella, Ratt, Kix, Warrant and Night Ranger are among the 19 bands to take over Merriweather Post Pavilion, playing full sets of their glam rock and heavy metal hits. For the first time, M3 fans won’t have to choose between bands with overlapping set times, since each band will play one at a time. Also, the festival will take place on two separate stages, each simulcasting the other, giving fans the option to stay in one seat and watch all the bands as they appear on both stages, or fans can move from stage to stage without missing a note.

Each year VIP and Pavilion seats sell out in minutes. VIP and discounted 2-Day Packages will go on sale Friday, February 3rd at 10am EST through Ticketfly. If there are any tickets remaining as of February 24th, they will go on sale as Single-Day tickets at 10 am EST. Tickets can also be purchased at the Merriweather and 9:30 Club Box Offices. For more information, visit www.ticketfly.com or www.m3rockfest.com.

About I.M.P.
Formed in 1980, I.M.P. is a Bethesda, Md.-based concert promoter and event production company. In addition to launching the Virgin Festival in the U.S., the principals at I.M.P. own Washington, DC’s legendary 9:30 Club, named the Top Club by Billboard Touring Awards and renowned as the premier place to see and hear cutting edge live music of all varieties. I.M.P. also programs and operates Merriweather Post Pavilion in Columbia, Md. Over the last 31 years, I.M.P. and the 9:30 Club have put on nearly 10,000 events, hosting millions of music fans.