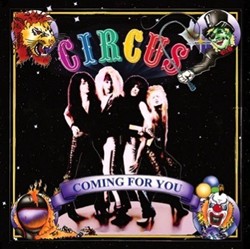 Circus Is ‘Coming For You’ With New CD

Early 90’s Sunset Strip glam legends Circus have teamed up with Demon Doll Records to release ‘Coming For You’ — the first CD ever to be released from these glam and sleaze bad boys! This 8 song masterpiece will drive you right down the Sunset Strip into the heart of Hollywood and everything it stood for.

Circus was one of the biggest Sunset Strip bands to prowl the night back in the early 90’s with staggering one night attendance figures at The Roxy upward of 1,200 people. They were also honored by Bill Gazzarri himself with the last house band star on the wall of the infamous Gazzarri’s night club.

Needless to say Circus brings everything you could ever want to the table with their hot looks and dirty hooks. Every song rings out with great melodies and great musicianship. The vocals snarl, the guitar shreds, the bass pounds and the drums slam everything into a heated overdrive with the smash hit songs “Fool Proof”, “In A Dream”, “Hold Out” and “Coming For You” to name a few.

The album is silver pressed, officially licensed from the band and exclusively available from DemonDollRecords.com. So if you love Glam, Sleaze, Hollywood, The Strip and every dark and dirty secret that came with it, order your copy of Circus ‘Coming For You’ today. You won’t be disappointed!

We will be offering this CD at a low introductory price of $12.99 for the first 2 weeks of release. So buy early and buy often (and listen to sound samples) at http://demondollrecords.com/Circus_-_Coming_For_You.html