UK based Circus Junkie Rebels have released two singles entitled “Shadows Of Yesterday” and “Stick To Your Guns” which can be heard and are available to be downloaded for free on their Reverbnation page. 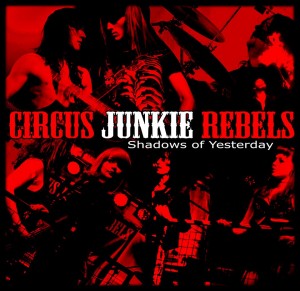 The UK rockers are scheduled to enter the studio to record their first full-length album on February 26, 2016.

The Circus Junkie Rebels describe their sound on their Facebook page as: “An adventure of lust and love, a one way ticket to hell and back, Circus Junkie Rebels tell their story of drunken mayhem and unhappy love affairs. Full of tales of dirty passions and rotten addictions this compilation of happy go lucky charm and dirtbag rock n roll is enough to soothe anyone’s taste for lust!”

“The band formed in the summer of ’14, Founded by current member Dani J Rankin and Joseph Steerment. Over the first year, the band began getting their footing recording their first self-produced EP and meeting with current drummer Chris Joines along the way. Bassist Corey Pyatt was soon to follow and within the year the guys found themselves signing a management deal with a local studio.

This started the next era when they began work on “Endless Dream”, a heart-stopping power ballad, that was sure to raise the bar. Accompanied by a music video by Nick J Townsend as seen for his work on ClingFilm and his band Weak 13!. Along with this release, the band also teamed up with George Bonner, Rose Stead & Annabella Stanyer for a live Freakshow spectacular in an aid to bring back the days of intense stage shows with Fire Breathing, Angle Grinding, Nail Beds, Staples, Drills and much more to get that adrenaline pumping! 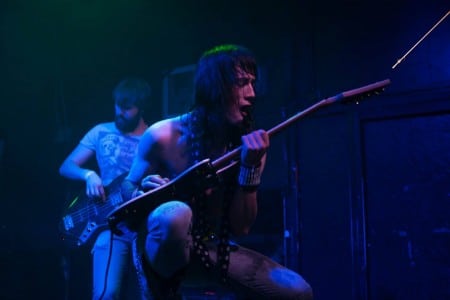 Photo taken by Charly Crawford at the Sugarmill on Dec. 22, 2015

After continuing the rest of 2015 with the Freakshow, parting hard and performing with bands such as Funeral for a Friends, Thomas Nicolas Band, OPM and more, the band then began work on their latest single “Shadows of Yesterday” in winter 2015, as well as parting ways with bass player Corey Pyatt due to life circumstances, but the guys still remain friends. They also departed from management as the band decided it was time to take a different road. The boys are now self-managed and made their way to work with Paul Hume (Demon, Lifeline, Lawless) at Summerbank Studios! After two days in the new studio, the band laid down two songs for single release “Shadows of Yesterday.”

After an amazing response to the new sound of Circus Junkie Rebels with the single release, the band have started booking up shows all over 2016 with the Freakshow back and the set new and improved! And with the new addition of current bass player Aaron Pointon, you can expect to see a lot more of this band of Misfits!”