Circus of Power release video for “Save The American Wolf”

Circus of Power featuring frontman Alex Mitchell have released a video for their new song “Save The American Wolf.” The group previously released the studio album Four in December 2017. 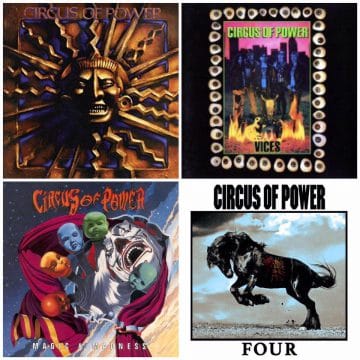 The band’s “Biography” on its Facebook page states (with slight edits):

“Circus of Power was the personification of East Coast sleaze rock during the late 80s and early 90s. Formed in the mid 1980s, during the burgeoning New York City club scene, the classic line-up of Alex Mitchell (vocals), Ryan Maher (drums), Ricky Beck Mahler (guitars), and Gary Sunshine (bass), were signed to RCA records and promptly released their seminal, self-titled debut album debut. Their brand of bluesy, bad-ass biker rock set the perfect backdrop for their lyrical swagger and stories of debauchery and depravity. A live EP (1989’s ‘Still Alive‘), and second full length (1990’s ‘Vices‘), continued their musical tradition and thrust the band towards new heights, securing major tours and MTV airplay. Line-up and label changes led to the third full length album, 1993’s ‘Magic and Madness‘ released on Columbia Records, the album ushered in a more melodic sound for the band, while losing none of the grit that fans had grown to expect. The group disbanded in the mid-90s, and despite a few sporadic “reunion” gigs, Circus of Power has been largely inactive…until now. With a fresh new line-up, including stoner rock legend, Brant Bjork, commanding drumming duties, the band is set to release their first new material in a quarter of a century. Get ready to ‘Motor’ on down and revisit all of your old ‘Vices’, because C.O.P. is back!”

Circus of Power‘s “Save The American Wolf” video:

CIRCUS OF POWER – Save The American Wolf