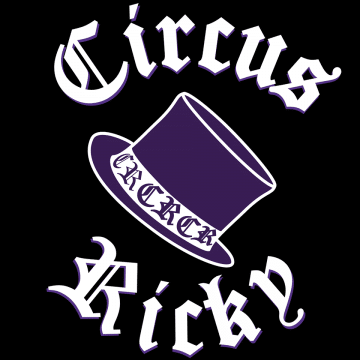 “Circus Ricky has been a progressive rock band doing covers and originals since the early 90s. Though there has been several versions of the band over the years, they continue to move on.

Singer Scott Tyzzer was the original lead vocalist for the band for over two years, then left to peruse other musical interests and family life. Then in late 2007, Scott and original bassist Jim White decided to reform the band using the name they had created and keeping the original idea of strong powerful music that had something to say. And a more original focus.

Due to financial issues because of the economy, Jim White and Heath Knoff left the band to later form another group. Scott took a short break to reorganize, and in early 2011, decided to start rebuilding the band with the original concept of playing good cover songs and powerful originals.

Pam answered an ad the band had posted and it didn’t take long to realize that she was going to be the perfect fit for the new direction the band was taking.

Through several trial and errors over the next few months, the band tried a few different concepts with a few different members, but now feels they have the line-up that will take the band where it wants to go.

Craig Coffman joined the band in late 2012. He has been a guitarist, mandolin player and bassist in a few local Bluegrass groups around Waynesville and is a much welcome addition to this project. On a very sad note, in early October of 2015, Craig passed away suddenly. We were all heartbroken and saddened by the loss of this great musician and friend.

Josh replaced Greg as lead guitarist in late 2013, and coming from a background of playing several styles of music, brings a unique twist to the band’s current creations.

Eric replaced Brian on rhythm guitars in early 2014, and gives the band a nice rounded out blue’s crunch, though being his first time in an actual band, Eric has been playing guitar for several years.

Andre has joined the band on bass, and being a close friend of both Eric and Craig, the group felt he would be a good fit. He is also a well rounded musician and has played with Barely Able as well.

Currently, they are working on writing a few new originals before looking to record in early 2016, as well as playing several venues around the Dayton and Cincinnati areas.”